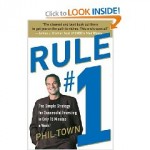 The KC-inspired discussion on Rule # 1 Investing (thanks, KC!) has prompted me to create a new group on Share Your Number, the home of people who want to help others (and themselves) to reach their Number ,,, and, now also the only web-Community [webmunity?] partially devoted to all-things-Phil-Town – well, at least to his book: Rule # 1 Investing.

To kick things off, I am sharing some resources (including my very own Rule # 1 spreadsheet!) … so, why don’t you join today?!

I braved the market storm and bought some stocks on Friday (about $700k in Citibank, Coach, Blackberry); for some reason I got bounced out of  Blackberry (RIMM) this morning … I can’t tell, but maybe I accidentally set my trailing stop at 1% instead of 8%?

Generally, I admit that I am stock market pessimist … always have been … but not any more … maybe!

This is the point in the post where you say: “hang on … when the market was going UP you were a ‘stock market pessimist’ and now that it’s crashing DOWN you’re suddenly a ‘stock market optimist’? Whattup????!!!!”

Everybody has ways of making (or losing) money that they are most comfortable with … mine happen to include: businesses, property (residential and commercial, buy and hold), and some other stuff that I will tell you about in upcoming posts.

Fortunately, these happen to be the preferred assets of the Very Rich … just dumb luck and good genes on my part … I suspected but didn’t know for certain that they were the preferred asset classes of the very rich (neither did anybody else) until the book that I told you about in a recent post came out (follow the link just under the chart  and read the book exerpt: http://7million7years.com/2008/01/25/how-much-does-it-take-to-be-rich/ ).

So, I was nervous about stocks in general,  until I came across Phil Town’s excellent book on stock market investing called Rule # 1 ( http://philtown.typepad.com/phil_towns_blog/aboutbook.html ). Get it and read it!

The book told me how guys like Warren Buffet find undervalued stocks … I just followed the methodology to find my own favorite stocks (I’ll write a post specifically on this) and played a bit in the market with them.

I only invested $1 mill into 4 or 5 stocks … promptly losing $100k … but, I had the opportunity to learn Phil’s process and put in my ‘tweaks’ (Note to self: delete ‘tweaks’ … sometimes it’s best to just follow the formula).