Whilst I was traveling, I hope that you had a little time to reflect on some of the advice that I’ve been dishing out over the last few years?

It’s important that you don’t just follow my (or anybody’s) advice blindly, else you may end up making some fatal logic errors like this poor bloke:

So my logic says that paying cash for anything when the investment return is higher than the interest rate is a mistake.  Suze Orman won’t give me advice on this, so if my logic is off, I hope someone will show me better logic.

Have you spotted the flaws?

The principle of taking a 2% loan on the car so that he can invest at 7% elsewhere is sound, BUT his assumptions are wrong:

1. A low-interest car loan is generally subsidized by price.

Check the true rate, if it’s more than 2% then he is probably better off negotiating the cash price lower THEN doing his cash v finance analysis. 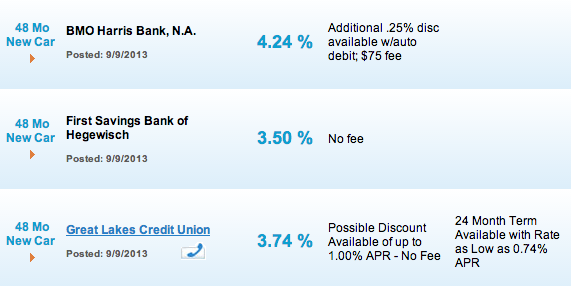 2. Unless he’s planning on a 7+ year auto loan, the correct comparison is the finance rate on the loan against a CD for the same term.

This is because the stock market is way too volatile and he needs an investing horizon of at least 7 – 10 years before returns even approach ‘normal’. 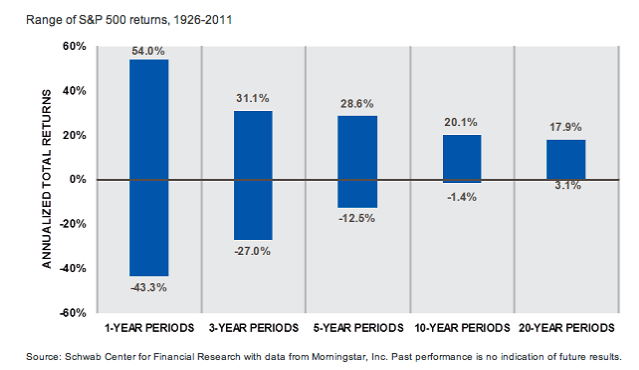 In fact, even though this chart doesn’t show that time period, he needs at least 30 years (based on nearly 100 years of data) to ‘guarantee’ at least an 8% return (the worst thirty-year period delivered an average annual rate of 8.5% between 1929 and 1958).

3. Your past returns are NO predictor of future performance:

But, he redeems himself, somewhat:

4. On the other hand, his mortgage comparison is ideal:

If you can lock in a 3o year mortgage, fixed at today’s ridiculously low rates, and lock that money into a low-cost index fund for the same period then, yes, you are almost assured of a 3%+ net return, compounded for 30 years (which means that he should almost return 1.5 x his initial investment PLUS whatever profit he makes on your property).

That’s why real-estate is such a great long-term investment, and why the stock market is a terrible short-term gamble.

What advice would you give?