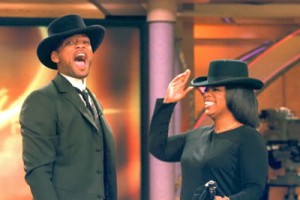 So, the jury is IN: money does buy (at least some) happiness …

… then, why isn’t Will Smith (who has PLENTY of money) completely happy?!

First, let me backtrack a little:

One of the advantages of being rich – well, 7m7y kind of ‘rich’ – is that acquiring technology isn’t an issue.

That’s why we have a Slingbox, which sends live streaming video from our friend’s satellite TV in Atlanta right to my wife’s PC (or, our home theater) in Australia.

This means that she doesn’t need to miss out on the most current episode of Oprah, and neither do I … on the odd occasion that I happen to be in the same room when she’s watching.

As it happened, on this occasion my wife was catching up on some more recent episodes that she missed while we were busy moving house, and it was how I happened to catch a bit of Will Smith’s Oprah interview.

Will said a couple of things that intrigued me:

First, he said that no matter how much money he accumulates, he never stops worrying about money!

Well, that’s actually good news, because I can see that through every stage of my financial journey, I have never stopped worrying about money.

And, so should you!

The second thing that Will said interested me even more: he’s not satisfied with his achievements to date … he can’t believe that he was put on earth merely to entertain people.

It seems that Will hasn’t found his Life’s Purpose!

Confirmation, to me, that fulfilment comes in three parts:

1. Discovering your Life’s Purpose, then

2. Working towards it, using whatever tools/talents you have been given, then

Step 2 is a means to an end (and, there’s no reason why you can’t bypass it if your Life’s Purpose doesn’t require the passing of time, or the accumulation of supporting assets).

… Will Smith might be famous and known for his singing/acting talents, but (for him) it appears they are merely a means to an end.

Discover your ‘end’, and the ‘means’ – even if not as exciting, profitable, and/or high-profile as Will Smith’s – becomes much more palatable.

What do you think?

4 thoughts on “… but, Will Smith isn’t (completely) happy”