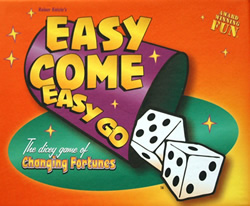 I have become obsessed with lotteries!

Not in participating … I don’t: I recently refused to buy a $7 ticket to a $20 million+ lottery; the vendor thought that I was crazy, but he was crazy.

[AJC: Actually, I used to participate in my office lottery syndicate as a form of ‘insurance’: if my staff won, they might leave en masse, at least my lottery winning would help cushion the blow … this is really how I think!]

There are government-sponsored anti-gambling ads running on Australian television right now that show that you have around twenty times the chance of a number one record as you do to win the biggest jackpot on a slot machine … lotteries are worse, much worse.

Yet, I can understand the temptation because the prizes are so large.

My interest actually has to do with my ‘easy come, easy go’ thesis: I believe that in order to keep a large sum of money, you have to make it slowly (so that you can learn the necessary financial lessons along the way) … by slowly, I mean years – say, 7 – not days.

When I heard that 80% of lottery winners lose their winnings within 5 years, I became very interested to find out more. Unfortunately, stats are hard to find:

Nora Moon, validations supervisor with the Virginia Lottery, has dealt with almost every lottery winner since the lottery began. Estimating how many Lotto winners have gotten into financial trouble is impossible, she said.

Documents submitted to the Supreme Court of Texas by the Attorney General state:

Steve Danish, a Virginia Commonwealth University psychology professor who has counseled Virginia Lottery winners, said one-third of about 40 winners he talked to in a seminar several years ago asked questions indicating they were in financial trouble.

But, I think the most interesting source comes from the lottery itself: Camelot Group Plc, who is the operator of The UK National Lottery. Camelot commissioned Ipsos MORI (a leading UK research house); in a good news / bad news survey, they found:

Of the winners who are happier (55%) around two thirds claim one of the reasons is improved financial security and fewer worries (65%). A further 23% either stated that they can buy what they want now or that life is generally a lot easier.

The large majority of Lottery winners have not experienced any negative effects on family life or friendships.

That’s the good news … surprisingly (after all, the research was sponsored by the operators of the lottery!), there was some terribly bad news in a one-liner buried in the body of the report; money does buy happiness … but, that money (and, presumably, the happiness) is short-lived:

On average, the winners have so far spent 44% of their winnings …

I forgot to mention that this survey carried out in 1999 by MORI, marked the 5th birthday of The National Lottery and the findings “represent the most complete snapshot of the generation of Lottery winners who have emerged since the first draw on 19 November 1994”.

That’s a 44% depletion of winnings during a 5 year period or, on average, after just 2.5 years!

All of a sudden the ‘80% of lottery winners are broke after 5 years’ myth is not so ‘mythical’ after all; here’s the lottery winner’s life cycle:

In either case, my ‘easy come, easy go’ thesis is looking better all the time 🙁

8 thoughts on “Money does buy happiness …”