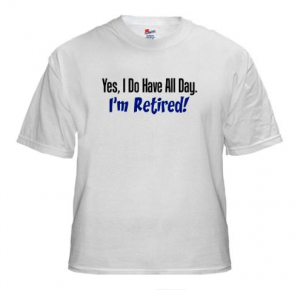 For our new readers, let me ask:

How would you like not one, but two ways to retire in just 7 years?

But, I warn you, retiring in 7 years is not easy … or, everybody would be doing it. However, I promise you that it can be done, either my way or Jacob’s way [AJC: Jacob is the author of the controversial book Early Retirement Extreme and the blog of the same name].

I would suggest that Jacob is an outlier in the Personal Finance community because of the aptly named ‘extreme’ portion of his book’s/blog’s title. On the other hand, my method to early retirement is just as extreme … just the other extreme.

In fact, I’ve said before that Jacob and I pretty much book-end the spectrum of personal finance advice.

So, let’s take a look the two methods and find out why each method, in its own unique way, is so extreme:

In his excellent review of Jacob’s book, Invest It Wisely summarizes Jacob’s reasoning for retiring early: so that you can explore “renaissance man” aspects of your life.

That is, ‘retire early’ so that you can become less job-specialized and explore wider, more varied options than you would if you were still tied to earning an income full-time.

In order to do that, Jacob advises taking drastic cost-cutting measures e.g. downsizing your home; lowering the thermostat in the winter and raising it in the summer; taking cold showers; downscaling to 1 car or even no car at all, and so on.

There has to be a reason and a benefit to this … and, there is:

The reason for the extreme (there’s that word again) austerity plan is so that you can … Save at least 75% of your income.

The benefit of saving that super-sized chunk of your pay packet is that you may be able to effectively retire in just 7 years if you do. Here’s how it works:

Let’s say that you currently earn $50,000 after tax and want to retire in 7 years. Jacob suggests that you should save 75% of your income, this means in the first year you live off just $12,500 and save the rest.

Now, if your salary increases with inflation (let’s say 3% p.a.), and you can invest the money that you save (starting with $37,500 in the first year and increasing each year with inflation) at an 8% after-tax return (by no means easy in the current market), then you should be able to replace your then-current salary after just 7 years with your passive income from your $300k nest-egg’s investments.

There are two catches:

1. Your salary in the 7th year (hence, your starting retirement salary) will be just $14,700 a year (representing a 5% withdrawal rate on your $300k of savings). Given that you started by living on just $12,500 and can retire in 7 years, you should be able to live like a king (or queen) on nearly $15,000 p.a. And, if you find that you can’t survive on $15k a year, well, you’re probably still young enough to enjoy your extended holiday, go back to work, and start again!

2. Our numbers are quite bullish: there’s no investment that you should put your money into for only 7 years that will return 8% after tax. In fact, you would be extremely lucky to return more than 2% after tax, and really should be just keeping your money in CD’s or bonds which currently return just ~1% before tax.

Also, a 5% withdrawal rate is hardly safe; you have to make this money last much longer than normal retirees, since you are retiring so early. A Monte Carlo analysis shows that withdrawing just 3% of your now-required $600,000 nest-egg is probably already stretching it. The good/bad news is that you can still retire in a still-not-too-shabby 11 years, on just under $20,000 per year …

… but (because of inflation), that’s only worth $14k a year in today’s dollars when you retire.

Super-extreme early retirement means, to me, retiring in 7 years with $7 million. This means retiring on $350k a year.

Is it really needed, especially since Jacob has shown that it’s possible for a couple to live on $12,500 a year?!

With $350,000 a year, you can definitely live the relaxed, varied lifestyle that Jacob suggests we should aspire to … just at a slightly different level to his suggested $12,500 / year lifestyle.

Vacations? Twice a year … travel business class and make at least one of them international 5-Star.

Upsize your home? Sure … and, pay off the mortgage with cash.

Raise the thermostat in the winter and lower it in the summer? Sure (as long as your ‘green conscience’ can stand it).

So, how does one do this?

Well, the key is this ‘specialization’ thing that Jacob says that we need to avoid long-term:

I agree, but for the next 7 years you absolutely must specialize in increasing your income, and increasing your savings appropriately. However, unlike the ‘extreme savers’, you never reduce your lifestyle … instead, you just don’t increase it as much as your income increases:

– Save 10% of your income starting right now (or, build up to it over the next few months, if you have started by saving less)

– Save 50% of all future salary increases; all additional income (from businesses, second jobs); and even more for unexpected windfalls (e.g. lottery winning, inheritances, tax refunds, etc.).

Instead of cutting costs – and, saving – which are inherently limited (even Jacob can’t save more than 75% of his income) – concentrate on increasing your income because the sky’s the limit: start a second job; start a part-time business; start an online, part-time business (call it Facebook and the rest is easy).

Most of all, start investing … actively, aggressively, wisely.

Simply follow my patented two-step wealth generation system (it used to be 4-steps, but I cut it in half … so, now you have no excuses) … voila!

There you have it: two methods of retiring young.

Choose the one method that appeals to you the most and, from today forwards, read the creator’s writings carefully, and ignore anything that you read that contradicts their advice …

… because every other method will have you enslaved for the next 20 to 40 years, with absolutely no guarantee as to what your retirement years may bring.

And, don’t let anybody tell you otherwise 🙂