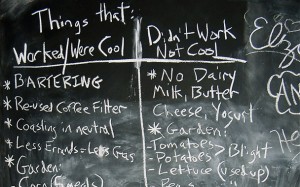 I know I’m happy, and I’m pretty sure that Jacob is happy, too.

Now, there are some non apples-for-apples comparisons, here:

– Jacob has a spouse who works; my spouse does not work but has thought about working

[AJC: one of the problems with being ‘rich’ is that it’s embarrassing to take a part-time admin. job that pays $13k per year, driving there in 10 years salary worth of car and driving home to 461 years worth of house! I told her that it might be better if she just donated her time to the charity that wanted to hire her]

– Jacob has no children; I have two

– Jacob’s net worth is higher than the typical American’s … so is mine!

Wealth is defined as being able to live comfortably on the passive proceeds of your investments; clearly, both Jacob and I can do that according to our individual assessments of ‘comfort’, so we are both wealthy.

Moreover, our wealth and retirement strategies are not for the masses … but, the lessons learned can be!

However – and, this is a big ‘however’ – I simply don’t believe that ‘extreme’ early retirement strategies really work for any, but a small minority of families. There will simply be too much financial pressure – some generated directly, and some indirectly (yes, peer pressure is real) from the children:

– Food: you may be happy eating home-cooked meals. Your kids will want sushi and sodas with their friends.

– Clothing: you may be happy with last-season Gap and TJ Maxx. Your kids will want this season Abercrombie and Ed Hardy.

– Education: you may be happy on $500 p.m., but how much college will that buy? Your kids will resent having to buy their own, so that you can do nothing.

– Health: your kids will be at the doctor every day … for everything from a runny nose to broken bones to removal of superfluous bits (foreskins, adenoids, tonsils, and appendix … and, that’s just in healthy children!). They won’t ask to go … every time they so much as sneeze, you’ll be dragging them there in a panic!

Of course, you could bring your children up like BF:

He too, is a minimalist, but his parents (well, his father) trained him to be like that from young.

When they were kids, they weren’t poor in the sense that they were living paycheque to paycheque. They had money, they had savings, but they never spent it.

BF joked that to his parents, Money = No Object(s)!

No Television: “It’s all crap on there. Sorry kids. No TV. It’s not reality, and if you want to watch TV, you go over to your cousin’s place. But it’s crap. The radio is better. And free.”

Then from not having a TV they avoided buying:

No Telephone: “Why do we need a telephone for? If you want to talk to somebody, just go over and see them.”

Then from not having a telephone:

So what did they spend their money on? Food. And utilities to cook food. That’s it.

No extra clothes, toys, or anything I ever took for granted as a kid. Not even soccer club fees or lessons, because that would mean that you’d have to buy a soccer ball and a uniform.

… you could – and, it might even be character building for both you and your children – but, I wouldn’t count on your future familial happiness 😉

11 thoughts on “Early retirement in the extreme …”