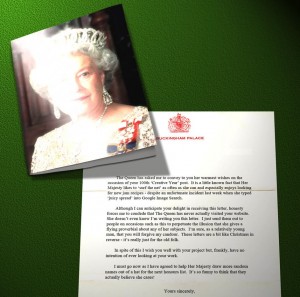 First of all, let me tell you that living to 100 is not a blessing.

My grandmother just passed away. She made it to 12 days past 100 years.

In fact, the 100 was like the finishing line to a marathon for her; in Australia, you get a letter from the Queen.

She also got a letter from the Prime Minister, the Governor General, and her local member of parliament …

… and, a little party at the old people’s home where she resided, complete with party hats and balloons. Hurrah!

My Grandmother lead almost the whole family unscathed through the holocaust (she ‘only’ lost one brother, where most others lost their entire families) and emmigrated to Australia almost penniless where she (and, my grandfather … but, mainly she) did what most immigrants do: work hard, invest wisely, and slowly rebuild their fortunes.

She may not have made $7 million in 7 years, but she certainly made that much in 30 or 40 years, starting with nothing. I can’t see why anybody would settle for $1 million after a lifetime of work?

So, what have I learned from my grandmother’s experiences?

My grandmother’s brain was amazing, right up to the end.

When she got her letters, she immediately recalled our Prime Minister’s name as being Julia Gillard.  And, just a few weeks before her 100th, she was still doing mental arithmetic (“if you were only 85, how much longer to 100? I asked. Within a couple of seconds, my grannie answered “15 years”).

But, her body was not so good: the legs went first, then the teeth, and so on … she often told me that living to 100 is not all that great.

My grandmother lived like a queen before World War II. He husband (my grandfather) was a banker in the small town in Poland where they lived. They also owned the local movie theater. My granny hadn’t worked a day in her life and had maids and servants. My grandfather never drove a car (he could afford a driver).

The war, and the Nazis, changed all of that. Coming to Australia destitute, my grandmother decided to start a business making neckties. Not only did she not have any money with which to start a business, she had never sewed a necktie in her life.

Instead, she took a job at a tie factory to try and learn how it was done and (after convincing the owner that she could, in fact, sew ties) she convinced a couple of the seamstresses there to make some sample ties for her after hours. Using those samples, my granny went door to door (shop to shop) signing orders for those ties.

3. Don’t ever convince yourself that you can’t ‘cold call’

If my grandmother – who had never worked a day in her life before and was a female at a time when all salesmen were … well … men – managed to do it, then so can me or you!

Once she had enough orders, she paid those same seamstresses a ‘per tie’ rate (it’s called “piece work”) to fill the orders. She then delivered the ties and used the money earned to start the process all over again …

… eventually, she had been through this cycle enough times to open a small factory and hire those “piece workers” away from their other factory job, and they stayed with her until my granny retired (she gave the business to her loyal staff).

4. Invest today so that you can live tomorrow.

My grandmother was no exception: she bought real-estate.

Not only did she buy real-estate, she also developed her own down-town property. To give you an idea what that may be worth, when he was 93 – and, living in the old people’s home – my grandmother sold another down-town property on behalf of her 3 other partners who were all as old as her.

The realtor told her that the property was worth $11 million. She said “rubbish” and managed to hold out for a better offer, which eventually came in at $18 million. Not bad for a half-deaf, bed-ridden 93 year old.

No doubt, I wouldn’t have made $7 million in 7 years without them, and I can finally share the ultimate source of my inspiration here with you.