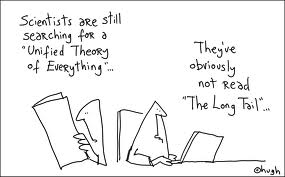 If you’ve been following this blog for a while, you may have the sneaking suspicion that I’m also a bit of a ‘mad scientist’.

For example, I told you that, like Albert Einstein, I’ve been working on a ‘unified theory’ [AJC: I’m rather proud of this post, so go ahead and pull it out of the 7m7y archives by clicking on this link: The Big Papa lives in the 11th Dimension!].

Unlike Albert Einstein, though, I am (a little more) kempt; (very slightly) less absent-minded;  (a lot) less than genius (even a little more ‘less’ each year); and, have no Germanic accent, although my parents spoke the language fluently (but, never allowed me to learn it … it was their ‘secret language’).

On the positive side, unlike Albert Einstein who reportedly went to his grave with his secret, I have found the Unified Theory of Finance!

After literally years of searching – and, this blog has been a way for me to publicly articulate my thoughts, and get the feedback that I needed along the way [AJC: so, I will need to remember to thank all of my readers – that’s you! – at my Nobel Prize for Finance acceptance speech] – I finally made this Great Discovery (?!) on the weekend.

In fact, the breakthrough came in two parts:

Because I am (still) enamored with Sponge Bob, I was attracted to “Eugene Krabs“, who left his version of the secret formula for wealth in a seemingly innocuous comment on Free Money Finance’s blog:

I’ve boiled what I’ve read myself down to the following equation:

(To be clear, capital is the money you have right now to make more money with.)

However, there are downsides to all of these individual factors.

Unfortunately, I can’t thank “Mr Krabs” because he didn’t include any links with his moniker. On the other hand, you may quickly spot a few issues:

1. Clearly Wealth isn’t an additive of capital, risk, and time, it’s really a complex function. But, that can be solved by rewriting the equation as W = C * R * T or, even better yet, as:

But, understanding the math is not the point – I’m sure that Mr Krabs’ formula is meant as conceptual, not mathematically rigorous – it’s understanding that you need to balance Capital, Risk, and Time, if you want to become wealthy, that’s important … at least, according to a fictional cartoon character who saves every penny that he can get his claws on 😉

2. The more important point is that this version of the formula forgets Return; and, if we substitute Return (e.g. the 9% or 0.09 return that you supposedly get if you stick your money in the stock market for long enough), you actually have something very similar to the basic formula for compounding (which, at least according to Einstein, is the ‘most powerful force in the universe’:

3. Even if I somehow modified Mr Krabs’ simple version (and/or the more complex – but, correct – mathematical representation of compounding) to include both Risk and Return (a.k.a. Reward), the formula IMHO still wouldn’t explain why Warren Buffett is sensationally rich investing in exactly the same stocks that we invest in, yet we manage to lose money (in the short term, in absolute value, and even in the long term, certainly after inflation is taken into account)!?!

Until I can explain that, there is no formula 🙁

Still my gut told me that Mr Krabs [AJC: I love using his pen name … I’ll see how many more times I can fit it into this really very serious post!] was on the right track, because his representation did provide the missing simplification that I needed.

Last Sunday, I took my son and a few friends to play in their weekly teenage tennis competition [AJC: we all got free ‘slurpies’ from a 7-11 Convenience store on the way back home from tennis because it was 7-11 Day: November 7, 2010. Go figure!].

Instead of watching the game, I sat in the car with all my notes – pages and pages of complex math, simple math, all trying to fit Risk, Return, Capital, Time, and so on into a simple, conceptual ‘formula’ … all the while, trying to use it to explain the difference between you, me, and Warren Buffett.

As I said, until I could do that, I had nothing!

It was driving me crazy! So, I did the only sensible thing: I laid back the car seat and dozed off … but, when I woke up half an hour later, I had it: 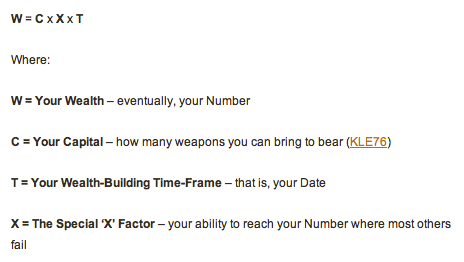 Really understand this, and you have the key to untold wealth … in any field of endeavor.

I’ll explain the X-Factor (it can be explained!) in an upcoming post …

PS Remember: this ‘formula’ is conceptual and is more correctly (but, still grossly) simplified as:

2 thoughts on “The key to untold wealth!”