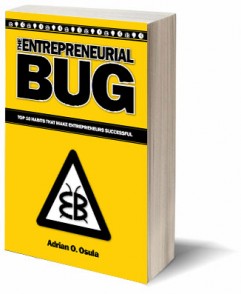 This post has been featured in the Carnival of Wealth: http://personaldividends.com/news/admin/carnival-of-wealth-august-7-2010-edition

People often say that they have been “bitten by the entrepreneurial bug” … and, I can say that is perfectly true!

I always wanted to be a ‘millionaire by 30’, but I missed my first million and jumped straight to making my 7th by the time I was 49 😉

But, that did not translate directly into wanting to be an entrepreneur; in fact, I was working for a Fortune 10 company and happily dreaming about becoming its CEO (“one day”) …

… apart from one or two disastrous years, I had a charmed time there, winning ‘bonuses’ left, right, and center – and, traveling around the world on the corporate budget, having the time of my life.

But, that all changed by Work Year 6.

Suddenly – and, I mean suddenly and inexplicably – I was struck with the desire to be in my own business. Almost literally, I was bitten by the entrepreneurial bug!

From that point on, I was miserable in my job … I schemed and planned my way to a myriad business ideas that I couldn’t quite translate into a real business.

In the end, I wimped out and joined IDB.

Yep, the Great Entrepreneur was In Dad’s Business!

Thankfully, that business promptly went broke leaving me with nothing but a $30k debt and a customer list, which I turned into a ‘cloned’ business (i.e. same customers, same concept, very similar name) that I still own, nearly 20 years later. And that business helped to fund the ‘other business’ that took me to the USA.

So, I guess I found the true Entrepreneur Within, after all …

But, what I wanted to share was my thought process, all those years ago when I was still at my ‘desk job’:

I wanted to be in business, and all I knew was IT (information/computer technology), so here were the choices that I came up with:

1. Consulting: as I mentioned in passing, in a recent post, I was something of a ‘world expert’ in my little niche so consulting was a natural first choice for going it alone. But, I realized that I would still be trading hours for dollars.

The formula is (from memory) 1440 possible working hours of the year – hours lost due to marketing, administration, and time off x billable rate = MAXIMUM total revenue. Plug any number in that you like, and it doesn’t add up to $7m7y.

2. Sell something: The only thing I knew how to sell was computers, and the only ones of those that I would likely be able to get a licence to sell would be PC’s. Unfortunately, I could see a price war and shakeout happening which would crush the small guys (this certainly happened).

3. Build something to sell: Again, the only thing that I knew was software: I could develop a piece of software and sell it. Unfortunately, every piece of software has a lifecycle … when the better one comes along, I’m toast.

There was my dilemma …

Fortunately for the world, Mr Price and Mr Coopers didn’t think about the consulting equation before starting PWC (one of the world’s biggest consulting companies before selling off to IBM).

Equally fortunately, Steve Jobs didn’t worry about costs and margins when creating the Apple 1 and 2 – then Lisa and Macintosh – computers and offering them to the world.

Perhaps unfortunately for the world (if you’re a M$-basher), Bill Gates didn’t think about obsolescence before licencing his piece of of software to IBM, then others.

Bottom line: if you’re passionate about an idea, give it a go … you’ll find a way to make money if the idea is good enough. If not, what you learn will be worth the ‘cost’ in lost time/money.

6 thoughts on “There IS an entrepreneurial bug!”