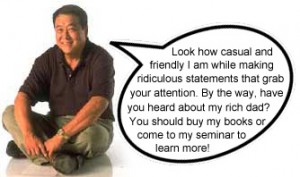 Robert Kiyosaki is famous (or infamous, depending on your viewpoint) for his break-out book: Rich Dad, Poor Dad.

Whichever way you happen to lean on this subject (and, please feel free to share!), I think that he deserves to be congratulated for thrusting personal finance back into the spotlight, and he equally deserves to be admired for his ability to parlay that first success into a personal finance publishing empire that includes 10 to 20 books, a few games, and so on.

In fact, RDPD is one of the very first books on personal finance that I ever read, and is certainly the book that inspired me to look into the field very deeply.

It’s unfortunate, then, that Robert Kiyosaki has managed to build up both a cult following and a cult anti-following (?!), neither of which I ascribe to.

Ahh, so you will now renounce your belief that Kiyosaki is not a quack?

Abandon the dark side…

All I’ve said is:

1.  His book – at the time – inspired me to look into the field of personal finance a LOT further.

2. I like RK’s definition of liability v asset (albeit, not technically correct, he says an ‘asset puts money in your pocket, and a liability takes money out’. Neat!).

I base this last assessment purely on a statement he made in RDPD (or one of his later books, perhaps Cashflow Quadrant? … I’m working from memory, here, as I have filed his book away somewhere) that he ‘retired’ to write that first book (or was it to create his board game?) on passive income of $100k p.a., driven primarily by real-estate.

That’s pretty much it!

But, and this is important, realizing that a lot of these personal finance gurus – whether well-meaning and genuine in their belief or out-and-out scammers, scoundrels, and liars – actually made their real wealth, if at all, AFTER (or because) they wrote their books …

… I firmly resolved that I would study the field of personal finance, apply what I learned, and (hopefully!) become rich in the process, THEN write about it from the standpoint of a REAL self-made, multi-millionaire entrepreneur and investor.

This blog is the result 🙂

13 thoughts on “The much maligned Robert Kiyosaki”