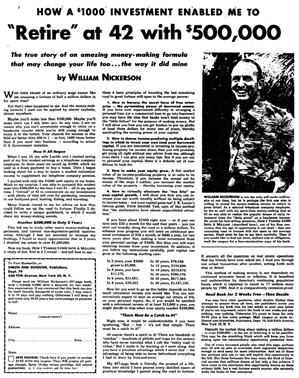 You’ve  heard the pitches, seen the ads, and even read the books …

… but, how successful are those ‘best-selling’ real-estate authors, anyway?

John T Reed is the guru-basher – rightly or wrongly, he reads, judges, and publishes his views on his web-site. Click on this link to read what he has to say about some of those real-estate gurus, then come back here.

You see, I want to point you to the very first ‘guru’ that he mentions: it’s William Nickerson. William Nickerson was unique in that he really was successful, and interesting for two reasons:

1. He actually wrote a best-selling book on real-estate that is the genuine article, and

2. He wrote (or commissioned) perhaps the very first real newspaper ‘advertorial’ (see the image, above).

According to John T Reed, an accomplished and genuine real-estate investor in his own right, William Nickerson:

… told the truth – but he did that back in 1959. His book, which is excellent, says to save money, put 25% down on rental property, renovate it, and exchange up to a bigger one and repeat the process.

BTW: I now remember that Rich Dad, Poor Dad was NOT the first personal finance book that I ever read. It was, in fact, an old book that I found in my Dad’s book shelf. It was called something like: How I Made $1 Million In Real-Estate and was written by a Hungarian ballet dancer who either moved or defected to the USA and somehow found a lucrative ‘hobby’ in real-estate.

His system was very similar: buy one rental property, rehab, and trade up for a duplex. Repeat and trade up to a quadraplex. And, keep going!

I can’t believe that I forgot about this book, as it was the one that really fired my imagination, after which I promptly did NOTHING towards investing in real-estate for at least the next 10 years 🙁

7 thoughts on “How successful are they?”