IMPORTANT: Please read this post in full, THEN choose the FIRST answer that applies.

There are two groups of people in this world:

– those who believe that there are two groups of people in this world, and

At the risk of parodying myself, I think there are two groups of people in this world:

– those who believe in The Secret, and

I want to conduct an experiment, right here / right now, to see if The Secret works …

First though, in case you’ve been living in a cave for these past few years (in which case, you have probably already developed powers far beyond those of The Secret), you will already know that The Secret is the most recent in a long series of books, blogs, and banter about the ‘power’ of creative visualization …

… see it in your mind and you will manifest it into reality.

Believe it, and it will be so.

I don’t know how The Universe works, so I can’t tell you whether I manifested my millions (perhaps by concentrating on my Life’s Purpose and the Number required to get me there) or was merely driven to make it at all costs … you could certainly mount an argument either way.

Also, I am an experiment of one …

Fortunately, we have Steve Pavlina who is an expert in these matters, and  is also the creator of a very interesting project, aptly called the Million Dollar Experiment:

The goal of this experiment is to attempt to use the power of intention to manifest $1 million for each person who chooses to participate. 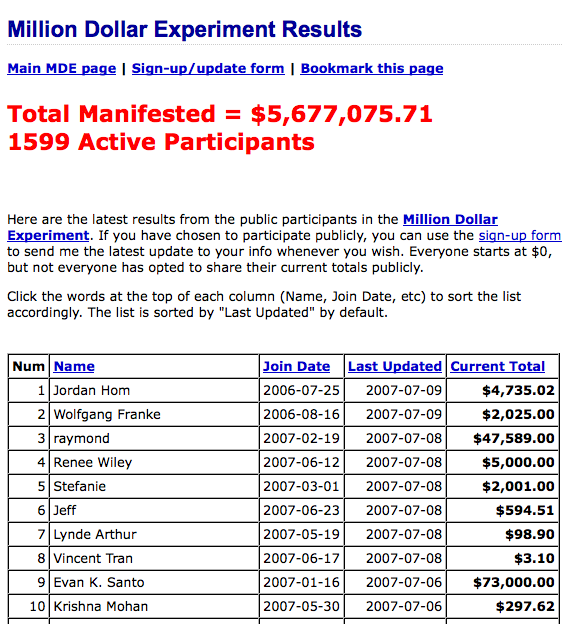 I’m not sure what you would count as a worthy ‘manifestation’ amount (I mean, would you dream of anything less than $10k in a year?), but 120 people – just 7.5% of those participating – ‘manifested’ $10k or more in that period.

Cast your mind back 18 months: how much have you manifested in that timeframe? I guess by ‘manifested’, I mean by following Steve Pavlina’s instructions to his own readers:

Only count the new money you feel has come into your life as a result of your participation in this experiment (i.e. the manifestation of this intention), not your regular income. Obviously your interpretation of that will be subjective, but this is a subjective experiment. Just do your best, and trust your intuition.

Just pretend that you signed up to Steve’s experiment 18 months ago … what money (if any) that came into your life since then would you have reported on Steve’s blog?

Oh, and feel free to tell me what you think about the power of The Secret, Steve’s Million Dollar Experiment, and/or this post … but, don’t forget to scroll back up to the top and make your poll choice first 🙂