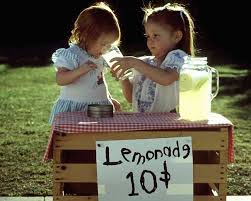 People think my son is following in his father’s footsteps …

… but, I didn’t even think about beginning my entrepreneurial journey until I was 26 (and, didn’t actually start until I turned 30).

My son, on the other hand, started his entrepreneurial journey when he was 12.

Whereas most children begin by starting a newspaper delivery round, or opening a lemonade stand – although, at age 10, he wanted to start a cake shop outside his grandmother’s house (naturally, she would bake, he would sell) – my son was a little different:

At 12 years old, AJC Jr came to me and asked for $50 to start his new business on eBay. He offered me 49%. I accepted, just to see what would happen.

And, something did happen: a week later a package from China arrived at our front door, and over the next week a few smaller packages left the same way.

[I didn’t have the heart to tell him that it doesn’t work like that. That’s probably the only non-commercial assistance that I’ve given his business in the last 6 years].

Since then, after growing his eBay store for 3 or 4 years, my son ‘graduated’ to an online service-based business that nets him in excess of $60k p.a. (turning over $100k++ p.a.) and has bought him a car whilst still in high school.

He contracts programmers in India and has 2 full-time customer service contractors in Manila. One of them just sent him a Christmas present and a card thanking him, saying that – because of my son – he can now fulfil his life ambition of opening up his own coffee shop.

Not only is my son setting up his own life, he’s changing other people’s lives already … and, he’s just finished high school.

With luck, and your encouragement and support (but, NEVER, EVER push) your children may embark on a similar journey … after all, the barriers to starting a business (i.e. by going online) have been lifted.

Why should your entrepreneurial child start a mere lemonade stand, when any child can now start an online marketplace for anybody who wants lemonade and anybody who can make it (or supply the ingredients and know-how)? 😉

5 thoughts on “The New-Age Lemonade Stand …”