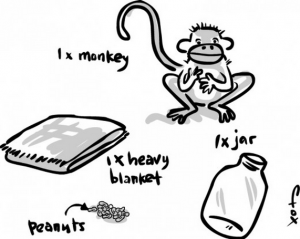 I’m always amazed by people who think that they can make ‘quick bucks’ (or, its sister currency: ‘easy bucks’) just by fiddling with paper …

… if trading stocks, options, FOREX, or commodities is something that you really want to do, I should at least teach you all that you really need to know before you begin.

And, it all has to do with catching monkeys …

But, rather than hearing it from me, far better to learn from the masters at Goldman Sachs, whom – or, so I am told by a very unreliable source – share this story with every new hire on their very first day of training:

Once upon a time in a village, a man announced to the villagers that he would buy monkeys for $10 each. The villagers, seeing that there were many monkeys around, went out to the forest and started catching them.

The man bought thousands at $10 and as supply started to diminish, the villagers stopped their effort.

He further announced that he would now buy at $20 each. This renewed the efforts of the villagers and they started catching monkeys again.

Soon the supply diminished even further and people started going back to their farms. The offer rate increased to $25 for each monkey captured and the supply of monkeys became so little that it was an effort to even see a monkey, let alone catch it!

The man now announced that he would buy monkeys at $50!

However, since he had to go to the city on some business, his assistant would now buy on behalf of him.

In the absence of the man, the assistant told the villagers, “Look at all these monkeys in the big cage that the man has collected. I will sell them to you at $35 apiece and when the man returns from the city, you can sell each monkey back to to him for $50 each. He’ll be none the wiser and we’ll all have made some easy money!”

The villagers squeezed together all their savings and bought all the monkeys.

Then they never saw the man nor his assistant again … of course, now there were monkeys everywhere!?!

So, before you begin trading, consider this:

EVERY trade is two-sided.

This means that if you WIN some other shmuck has to LOSE. Sounds a bit like a poker game, doesn’t it?

If you agree, it would be wise to remember a very important saying in the world of professional poker:

If you can’t see who the shmuck is at the table … it’s you!

So it goes with trading: for every trade there is a counter-trade, and it’s probably being made by somebody with more experience than you …

… since so much institutional money passes through the various markets each day your ‘adversary’ is most likely a professional investor.

Now, let me ask you:

Would you play heads up poker with a professional poker player for anything other than the learning experience or fun?

Or, do you  really think you can turn a long-term profit catching monkeys? 😉