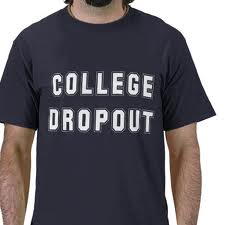 I am 21 years old living in Los Angeles CA. I dropped out of [college] after 2 years of studying because of lack of stimulation. I’ve had a job since I was 15 and have been in sales since I was 18. I currently work as an account manager at an IT outsourcing company. Oh, and I forgot to mention one small detail, I am also $40,000 in college debt.
My only plan right now is to gain enough experience and a set of skills in sales to make six-figures. After that I will begin investing. I know its to early to doubt myself, but I am constantly reminding myself where I am and where I am going to make sure I am on the right path.
My question is this, am I on the right path? A lot of my colleagues do a great job reminding me about the glass ceiling above me because I don’t have a college degree. Also, once I start making six-figures, how do I learn how to invest?

I told Eddy that I don’t/can’t give personal financial advice (laws aside, I simply don’t know enough about him … or any other reader).

BUT, I can make some general observations about the e-mailed question:

To succeed in life requires tenacity … and, to make any sort of large Number (e.g. $7 million) in any sort of soon Date (e.g. 7 years) requires super tenacity; if it didn’t, everybody would be rich!

More on this a little later …

Eddy’s second problem seems to be his unwillingness to even begin investing until his income reaches the “6 figures”.

[AJC: if you haven’t already done so, Eddy, please read this post: http://7million7years.com/2011/05/26/the-pay-yourself-twice-wealth-strategy/]

If Eddy does, one day, it may not even matter that he didn’t complete college 😉

Back to Eddy’s first problem …

The first thing that I look for in anybody who tells me that they wish to succeed financially is “show me evidence of your ability to follow through”.

With this e-mail, I see a couple of red warning flags:

The first one is, what sort of return on investment is there in a $40k college loan for a college degree not completed?

I’m guessing none … after all, you don’t need two years of college to work from age 15, nor to get most typical 18 y.o.-level “sales” jobs. So, by not completing college, Eddy seems to be $40k worse off than anybody else entering the same sales job at the same age!

6 thoughts on “Another reader question …”