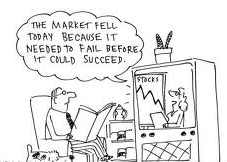 The relatively recent gyrations of the stock market from all-time highs to many year lows and back again, and so on, have scared many into pulling their money out of the market … and, keeping it out.

This is a mistake …

Unless you have solid plans (and, expertise) in investing elsewhere, the stock market is a pretty good place to try and build up your warchest.

I would like to see you make major forays into businesses and/or real-estate, as these offer the best opportunity to make money that can be counted in the millions, but the stock market is a pretty good alternative.

And, certainly better than sticking your money in the bank!

The problem is that most people panic during a crash …

What they don’t realize is that crashes will occur around every 10 to 20 years, and recessionary downturns occur every 10 years – more or less – as well.

The question is: which one leads to the other? The answer is not always clear-cut. But, it doesn’t really matter.

You see the market always recovers.

Unless there’s a ‘fundamental change to life as we know it’ (such as the fall of the Roman Empire) the market comes back to life.

The stock market wasn’t developed as a means to speculate on some random ticker prices, as it has become to many professional traders and certainly to most lay-investors (that’s you and me, bud).

It was developed as a means to share partial ownership (i.e. to raise capital for expansion, etc.) of real, live companies.

Real, live businesses make stuff, sell stuff, and (usually) make a profit in doing so. Their ability to make a profit is more closely related to market forces (i.e. customers, competition, etc.) than it is to economics.

And, their ability to make a profit has virtually zero correlation to stock market sentiment.

Yet here’s what occurs [hypothetical chart]:

The yellow line represents some hypothetical economic indicator (e.g. growth in GDP), and does its thing.

The blue line represents the stock price of a company we are tracking and it rises and falls as prices (both the prices its customers are willing to pay and prices its suppliers feel that they are able to charge) and labor costs and so on rise and fall.

Interestingly, company profits (hence earnings per share) are somewhat related to the economy, but not always obviously: in a down economy, a huge new contract with upfront payments could help to improve company profits; so could a new plant being completed (it was probably commissioned when the economy was looking good!).

However, the red line – which represents the share price of our company – reflects market sentiment: there’s a rumor going around that the ceo is about to be indicted on a racketeering charge, so it goes south very sharply. The ceo, of course, steps aside pending the investigation and in a week or two, there will be an announcement that no charges were made.

Notice that the company still commissions its plant and production goes up; some customers hold off on new purchases because of the rumors (catching up after the ceo steps aside amidst the rumors, and certainly after the charges are eventually dropped) but most contracts were signed weeks/months ago and business generally improves.

The share price, of course, will rebound making some traders very rich.

So, here’s the crux: if you’re a stock trader, you will live by these market sentiment issues; they will misprice the market and/or individual stock prices over and over again and you will make or lose a fortune depending on how well you read things.

But, if you are a stock market investor, you will look to buy future company profits, not future market sentiment.

Investing in market sentiment is gambling, and you can see where that might lead.

But, investing in future company profits is a pretty good game, if you choose good, solid companies and simply close your eyes when the market plays its little games.