It’s not too late to enter my free contest: in just 3 more days, I am giving away $700 cash to one lucky reader (drawn at random) as part of my $700 in 7 Days No Strings Attached promotion. It’s free to enter simply by clicking here.

Remember, the more entries you earn the more chance you have to win! You can check out the current leaders here! 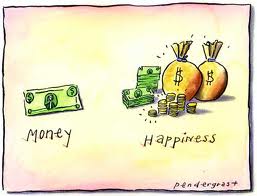 Finally, there is a study that equates money to happiness!

The Wall Street Journal reports a study by “the Princeton economist Angus Deaton and famed psychologist Daniel Kahneman”, which states:

As people earn more money, their day-to-day happiness rises. Until you hit $75,000. After that, it is just more stuff, with no gain in happiness.

Let’s assume you want to retire in 20 years on the equivalent of $75k p.a. – after adjusting for inflation (roughly double your required income every 20 years) and applying the Rule of 20 (equates to a 5% p.a. drawdown on your money), this means:

None of my readers are chasing less – otherwise, why would you be reading a blog called How To Make $7 Million In 7 Years (?) – but, the point of the study has been taken by the press and the pf blogging community to mean that it’s pointless to chase more than $3 million … seemingly making my uniquely positioned blog redundant by half 🙁

Well, it’s quite interesting because there’s a second part to the study that the media and most other bloggers are conveniently ignoring:

That doesn’t mean wealthy and ultrawealthy are equally happy. More money does boost people’s life assessment, all the way up the income ladder. People who earned $160,000 a year, for instance, reported more overall satisfaction than people earning $120,000, and so on.

“Giving people more income beyond 75K is not going to do much for their daily mood … but it is going to make them feel they have a better life,” Mr. Deaton told the Associated Press.