Scott who – in my post proposing a Zero Dollar Emergency Fund – says:

I’ve given this topic a lot of thought and how do you feel about seeing a typical ‘emergency fund’ as more of a temporary ‘war chest’? In that, you are building up this cash savings reserve as fast as you can, while you scout for that next great investment opportunity (ie; stock in that excellent undervalued company that you researched, or that terrific foreclosure that you’ve scouted out in a great area that you want to purchase and turn into a rental property, or an excellent business idea or perhaps funding the expansion of your current business).

I figure that way, this money has a specific target(high returns that are more likely to get you to your number by your date) BUT, in the meantime, if Murphy pays you a visit while you’re building up this ‘war chest’, you have some liquidity(ie; emergency funding) to tackle that emergency. But, as soon as you have enough built up to take that next investment opportunity, take it with this money!

The short answer is that Scott has some cash lying around, and hasn’t yet figured out what to do with it. An ’emergency’ pops up, so the logical thing to do is to dip into that cash and use it to solve the problem.

I don’t have any issue with that: but it isn’t an Emergency Fund. It also isn’t a ‘war chest’. It’s just some spare cash lying around …

So, let’s take a look at the following graph to see what may be happening [AJC: I’ve adapted this graph from something to do with the ‘mating cycle of dogs’ that I found on Google image search, but I think it suits our non-canine purposes just fine!]: 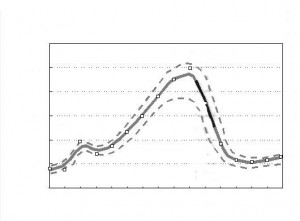 Let’s pretend for a minute that this graph represents the amount of ‘spare cash’ that Scott has lying around (Y-Axis) at any point in time (X-Axis):

Scott starts building up his savings, has a little glitch as he realizes that he forgot to pay his car insurance premium by installments so he has to pay it all at once, then steadily builds up again until it reaches Scott’s ‘peak’  – his ideal Emergency Fund of $10,000.

Then Scott hits paydirt: an idea for a new online business, and he starts to spend that $10k on programming, domain name registration, hosting, Google Adwords and all the other stuff needed to get the ‘side business’ off and running. A couple of months and $9k later, Scott’s business is paying it’s own way [AJC: well done, Scott!].

Do you see the problem?

The only time the Emergency Fund is adequate is between the time that Scott has managed to save up the full $10,000 and the time he starts spending the money on something else (in this case, his new business idea; it could easily have been a vacation, new car, girlfriend, or …?).

6 thoughts on “The Murphy’s Law Fund”