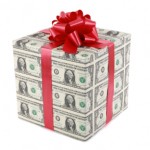 They say that the will to give – to donate – generously is governed by a gene.

For those readers in – or approaching – MM301 (i.e. you’ve made your millions, now you are struggling with what to do with it), I want to test that gene to its fullest, by asking you a question:

Would you donate your last penny?

I can honestly say that I would not …

Which brings me to a related topic: it seems that many people who come into money take a chunk of it to donate. Perhaps to have the wing of a school named after them, or to do some other ‘good works’.

Let’s say that you plan on living for another 40 years, and you can invest your money at 5% above inflation, then the real value of your donation is not $1,000,000 but more than $6.7 million!

[AJC: if inflation runs at 4%, and you can get an average return of 9% over 40 years your $1 million will grow to almost $29 million, but inflation takes away a huge chunk of it!]

When thinking about donating that $1 million [AJC: The Cartwood Family Wing does sound tempting], I’m not really thinking too much about that $6.7 million [AJC: or, $28.8 million … ounch!], I’m actually asking myself:

Would I donate my last $1 million?

You already know the answer to that 😉

If all goes belly-up in my financial life, I really may have just given away my last $1 million … in other words: if I lose $6 million, I am now broke (since I already gave away the 7th million of my 7m7y).

That’s why I would never donate a lump sum … instead, I would invest that $1 million for the benefit of charity. Further, I would not even pledge the capital or the income stream in advance, I would simply make the requisite donations annually and anonymously.

It may not get my name ‘in lights’ [boo hoo]; it may not help the charity with capital acquisitions; and, it may not be the most tax-effective method of donation (compared to, say, charitable trusts and the like), but it will help both the charity and me, long-term:

1. The chances are that I can invest $1 million far better than the people running the charity can [AJC: after all, I’ve made 7m7y]

2. It’s likely that the charity – or, some other equally worthy casue – can use $6.7 million more than they can use $1 million, albeit spread over 40 years; but, I admit that I’m just making a wild guess that the world will need philanthropy for at least the next 40 years.

3. If all goes belly up, and I end up becoming the one in urgent need of ‘charity’, I can ‘donate’ my last million (at least the income thereof) to myself and my family.

4. When I die, if I feel so inclined, I can finally donate either the asset or the income stream (or both) to the charity as I will no longer require it as insurance for myself. On the other hand, I may choose to pass it on to my family and let them decide.

I guess nobody will be talking about “AJ Cartwood, the great AustraloAmerican investor, raconteur, and philanthropist” … at least, not during my lifetime 😉

2 thoughts on “Would you donate your last penny?”