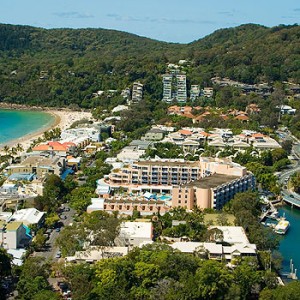 Now that we’re back from vacation I can retain my blogger’s right to semi-anonymity, yet risk little by answering Mike’s [and, some of our other readers’] question:  “Which beach in Australia is this?”

After discussing the real-estate ‘deals’ of Bill the shaved ice man, and Massimo the ice-cream man [AJC: did I mention him?], while buying – naturally – shaved ice and icecream, as one does when in Noosa on vacation, now that we were finally home and ready for a change of scenery …

Son: “Why has the bank invited you to their private corporate box at [a certain upcoming international sporting event]?”

Father: “Well I have a lot of money on deposit with them”

Son: “But, they have to pay you money [interest], aren’t their important customers the ones that they lend money to and who have to pay the bank money?”

So, I explained to my son that I am now both a borrower and a lender to my bank:

– As a lender, they pay me roughly 3% on the money that I have sitting in their bank,

– As a (recent) borrower, they charge me roughly 7% (interest + bank fees and charges) on the money that they lend me.

Son: “So, they only make 4% interest … is that enough for the bank to make money on?”

Father: “Don’t feel too sorry for the banks!” 😉

They are operating on (at least in this example) a 133% Gross Margin.

… of course, the banks have costs:

– They have to carry stock (i.e. pay interest on funds deposited) even if they don’t sell it (i.e. lend it) … unlike a ‘normal business’ the bank has these great treasury departments who simply put this ‘spare money’ into the short-term money market and earn interest,

– They have the usual staff, office lease, and overhead expenses of any other business,

– They have the risk of fraud / credit default on the money that they lend out.

All of this is factored in to produce a Net Profit that is amongst the best of any type of business (GFC aside). This got my son thinking:

Son: ” So, why don’t you put your money in a safety deposit box and lend it out to other people instead of letting the bank make all the profit on your money?”

Well, as I explained, I actually do: I have a finance company of my own, and we look at our finances this way; the interest that we charge our clients is treated as ‘fees’ … we divide that Fee Income (very roughly) into three parts:

– 1/3 goes to pay the bank’s interest and fees on the money that we borrow from them to lend to our clients,

– 1/3 goes to pay our staff, rent, and overheads, leaving

This is strikingly similar to the ‘standard’ restaurant formula:

– 1/3 goes to pay their staff, rent, and overheads, leaving

– 1/3 which goes to their profit … of course, that’s the theory but the reality for restaurants and many other businesses is vastly different (but, that’s a subject for another post).

So, why don’t I do what my son suggests for the bulk of my money?

Simple: I don’t have the ability to handle the credit / fraud risk!

But, the bank can because they have the people, the systems, and the sheer bulk of money out there which effectively spreads their risk (IF they have followed sound credit lending policies ….enter housing crash and GFC).

Later on this week, though, I will tell you how YOU can become the bank … without the risk.