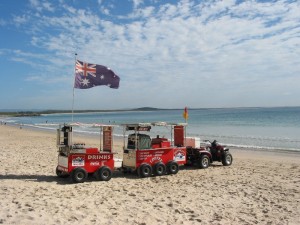 But, what about the other financial question that my son asked while we were on vacation?

Well, we were walking along the beach and Bill, the shaved ice vendor, drove past with his little all terrain vehicle pulling his ‘shop’ behind only to stop a few yards up the beach to tempt my son – and, the many other children running along the sand and swimming in the warm surf.

Naturally, I  quickly became $3.50 poorer and my son had his paper cone filled with shaved ice with various color sweeteners poured over it (he chose ‘rainbow’ flavoring), which got us talking:

You see, it’s popular folk-lore that Bill, who has been selling his flavored shaved ice along the beach for 20 to 40 years, owns many of the apartments in the vacation rental buildings all around [AJC: check out the aerial shot in yesterday’s post] … if true, then Bill is the poster-child for the Wealth Alchemist i.e. turning temporary cashflow into long-term assets.

It’s not hard to see that Bill turns over thousands of dollars a day, most of it costing him nothing (little staff, few overheads, little-to-no-cost-of-goods-sold), after all, how much can ice cost to make?!

Instead of spending all of that money, it’s not a great leap to assume that Bill saves up enough for a deposit to buy a property every now and then; we figure $1 million worth of property each year (with 20% initial equity).

Here is my son’s question:

“Would he pay cash for the properties, or would he just save up enough for a deposit and borrow the rest?”

Now, this is a seemingly simple – yet terribly interesting – question; one that we could labor over for many posts … instead, we’ll look at this another way, by asking:

“Does Bill need the property for income now or for its future value (hence, future income)?”

The answer is clear: Bill has plenty of income now, but what does he do if his income stops?

Presuming that he can’t rely on being able to sell his business (for example, the council could decide that they no longer want people peddling ice on their beaches), then Bill will probably want his properties to generate a replacement income “one day”.

So, which would do that better? When Bill moves into MM301, it’s likely that owning the properties outright and living off the rental treams that they throw off will be best …

… until then, Bill has to (in my opinion) work on the strategy that will produce the most properties by the time he wants to retire.

So, I had to explain the concept of leverage to my son:

SCENARIO A: If you purchase a property for $100k CASH and it doubles in 10 years, then you have $200k of property. Well done!

SCENARIO B: But, if you purchase TWO $100k properties, putting $50k deposit into each and borrowing $50k for each from the bank, then in 10 years (assuming they both double), you now have $400k of properties, of which you owe the bank $100k (assuming that you haven’t paid down any of the loan in the meantime), leaving you with $300k of property … a $100k improvement over Scenario A.

At least, that’s what the property spruikers would have you believe …

… because, they have conveniently forgotten that in Scenario A, you also have some rental income (after, say 25% costs) coming in, whereas in Scenario B that income would be largely offset by interest owed to the bank.

The question is, is that differential in income ‘worth’ $100k over 10 years?

Let’s assume that we can get a 5% return from our Scenario A property (after costs), giving us $5k a year initially (when the property is worth $100k), increasing over time to $10k a year (when the property increases to $200k in value). It doesn’t take a genius to figure that this comes to less than the extra $100k that Scenario B gives us (if you assume an average $7,500 per year rent for the 10 years, we are comparing $75k in rent for Scenario A to $100k in additional capital gain for Scenario B).

Now, add the benefits of:

– Increasing rents offsetting fixed interest rates (possibly producing some positive cashflow from each of our 5 properties as time passes),

– Tax deductibility of any excess of interest over income in the early years (a.k.a. negative gearing),

– And, any additional tax and depreciation benefits of 5 properties v only 2

… and, it’s just possibly a ‘no brainer’, even if that does make some of those scummy spruikers right 😉

But, how does Bill pay his bills?

Well, that depends on how much excess of income the properties produce by the time Bill is ready (or has) to retire …

… if  insufficient to pay Bill’s bills, he can sell enough properties to pay off the bulk (or all) of the bank loans, thus forcing a positive cashflow situation (assuming the properties aren’t total dogs, which is highly unlikely in this well sought after tourist area, which boasts near 100% year-round occupancy) and that (after a reserve to cover costs of vacancy, property management, and repairs and maintenance) is his infltation-protected income for the rest of his life.