Yesterday’s post was about Suzy Welch’s “life transforming idea” (her words, not mine) about the Power of 10-10-10, which I believe can be applied to financial decisions as well.

Now, here’s an even better idea:

How do you know WHEN something is a ‘major financial decision’ worthy of asking Suzy’s Three Big Questions?

Simple, use this table: 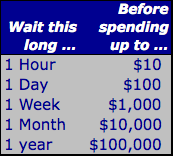 If you’re on a low-to-average income, or still well-entrenched in Making Money 101, then you may want to replace each ‘$1..’ with a ‘$3..’ but, if you’re super well-off, then you just start adding zero’s to the dollar amounts to suit!

But, the ‘default table’, as presented above, is a pretty good place to start …

So, next time you’re walking past a store and see that little $99 ‘number’ on sale that you simply “HAVE to have … and, look … it’s ONLY $99! [squeal]” pull out this little table – that you’ve laminated [ AJC: don’t worry, you’ll wait at least 10 minutes in line at Kinko’s to give yourself plenty of time to decide if the cost of laminating is worth it :)) ] – from your pocket and check to see that you really need to come back in 24 hours to complete the transaction …

… chances are you won’t.

Think about even the small expenses that you may be tracking, if you keep a budget; take a glance down the list for even one or two random days and see how many you would have not bought (or bought less of, or fewer of, or the cheaper one of, etc.) had you taken even 10 minutes ‘time out’?

Is this being frugal [AJC: shock/horror … 7million7years on a frugality drive?] – perhaps, overly so? I don’t think so, because you can still make the purchases that you want to make … it’s just that you may change your mind IF you:

(a) allow a little time out, and

Instead, you may just end up suffering a little less buyer’s remorse …

Well, when the ML Mercedes first came out, I simply HAD to have one of those [squeal] little SUV’s that drives like a car … after some self-imposed ‘time out’, I decided that I really didn’t need the car right now.

Sure enough, the burning desire to buy the car – right then and there – dissipated to the point that I forgot about it; sure enough, a year later the opportunity fell in my lap to buy a factory executive-driven vehicle (genuine … I bought it directly from Mercedes Benz head office), virtually no miles on it, for $11k off the best dealer price that I could get.

Oh, and last week I was hungry … but, after 10 minutes of waiting decided I was even more hungry, so I bought more 😛

Give it a try and let me know how 10-1-1-1-1 works for you … use the Contact Me form on the About page or just drop me a line at AJC at 7million7years.com, I love hearing from readers (but, not spammers) …