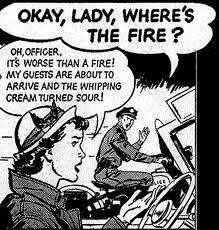 When you get pulled over by the police for speeding, they often ask: “Where’s the fire?”

And, when anyone tells me that they have 3 to 12 months living expenses sitting in a CD, I have to ask: “where’s the emergency?”

The assumption is that you will have unexpected expenses at some time in your financial life, and you will have to come up with a way to fund them without having to sell the kids or the dog … but, definitely not your boat!

So, the questions are: Do you need an emergency fund? If so, how much should it hold?

Today Forward presents an interesting way to look at how much to hold in your Emergency Fund:

According to the author:

If you have a full year’s worth of expenses set aside, only once every 33 years would an emergency come up that would wipe out these reserves.

Basically, you look at the chart to see how often you would tap out the fund according to how large the fund is (i.e. how many months of expenses do you have set aside as an ’emergency fund’?):

But, these are hypothetical numbers; what is the real-world chance of an emergency cropping up?

Well, the Pew Research Center set out to find out the answer to that exact question …

Only one in three of the 2,000 families surveyed had a ‘financial emergency’ in the past year.

Combining that with the graph above, and it would seem that you would need about 3 months living expenses set aside.

However, I think it’s also important to answer one more question: how much will the average ’emergency’ cost?

Well, the Consumer Federation of America found the figure to be surprisingly low:

What are these unexpected (or ’emergency’) expenditures?

The Pew Research study found they typically fell into the following major categories (which add up to more than 34% because many families reported more than one category as having occurred in the same year): 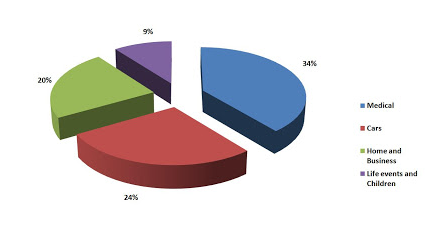 On the other hand, you have a 34% chance of having an ’emergency’, which will then cost you $2,000. Where will that money come from? Well your break-even point on that expense, if you had to borrow it, would be 26%.

So, borrow it on your credit card for all I care!

[AJC: Actually, I do care … the key is to have a plan to pay it off within 12 months; if you do, then a 0% card set aside for exactly that purpose would be ideal. Borrowing against your home via a HELOC would be OK, too, as would borrowing against your 401k. Sure you wouldn’t like to do any of these things, but you are dealing with the unexpected so a little short-term discomfort is probably OK]

Now, the reality is that if you were merely going to stick the $7,500 in an index fund, and earn an extra $500 or so, then I would say just go for the emergency fund … for your peace of mind.

But, why have it lying around earning next to nothing, when it could be the seed capital for your new business or the deposit on your first piece of investment real-estate?

Oh, and if you’re worried about the possibility of losing your job, well, don’t (unless you have GOOD reason to) …

… I’m not sure how different these numbers are in the USA, but if you live in the UK (according to MetLife) you have only a 6% chance of losing your job in any one year. And, when you do, you have a 30% chance of getting a job within the next 3 months, or close to 100% chance in the next 9 months.

Rather than putting your retirement at risk by setting aside too much money for an event that has only a small chance of occurring, realize that:

1. Your money is always better off working for you, and

2. While you are able to work, you can always borrow (and pay back) enough to recover from any financial catastrophe that the typical emergency fund is large enough to cover.

That’s why, at least in my mind, the best defense is always a good offense 🙂

12 thoughts on “Where’s the emergency?”