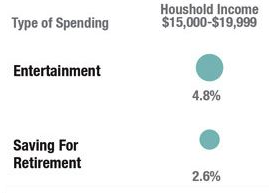 It will probably be something to do with lack of luck, opportunity, income, and so on …

And, that may all even be true (but, if you keep reading this blog, you’ll find that all changes pretty quickly).

But, tell me what excuse anybody has for not being able to retire with a paltry $1 million in 20 to 40 years time?

Take a look at the chart above: people on low incomes are spending nearly twice as much on entertainment as they spend on saving for retirement!

Now look at the same comparison for other income groups:

That ‘saving for retirement’ ratio reverses as income increases …

But, take a look at those earning high incomes of $150,000 or more: they spend nearly 3 times as much saving for retirement as they spend on entertainment.

So, let me pose a question:

Was it their high income which allowed them the ‘luxury’ of putting away so much for their retirement?

Or, was it the same mindset that compelled them to begin thinking about their financial future that set them up to:

1. Increase their income so greatly, AND

I know what I think. How about you?

6 thoughts on “Why the poor get poorer …”