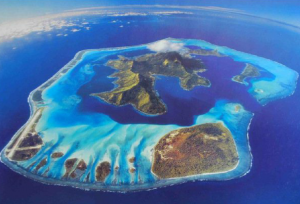 Normally, I avoid answering questions outside of my personal experience, so you should be able to surmise that you need more than $7 million before it makes sense to buy your own slice of paradise.

Instead, I feel that a little logic and a minute or two with a calculator will allow us to come up with a reasonable estimate:

First, let’s take a look at how much an island will set you back …

… I’m not talking something that Richard Branson might buy; perhaps something like Blue Heaven Island in Bora Bora, which will ‘only’ set you back a tropical $4,990,000!

But, buying an island is not as simple as having $5m; take it from Mike, who says:

When you are in the middle of the ocean, separated from the nearest stores, schools, and hospitals, the price can reflect that. Also, to get to and from your island requires an expensive boat.

Wise words; maybe ‘Mike’ has bought an island or two, in his time?

So, it seems, to be able to buy a “decent island” you need to have enough net wealth to cover:

1. The cost of the island

3. The cost of your own home

4. Your own annual (non-island) living costs

There’s no way to answer these questions accurately without making a whole host of assumptions, but I’ll take a stab, anyway:

i) If an island costs $5m, then the annual running costs should be estimated at between 10% and 20% of the purchase price. This is purely an educated guess. Let’s say $750k p.a.

ii) If you own a $5m island, I’m guessing that your own home/s will cost the same, let’s say another $5m

There you have it:

I think you need at least $40m net worth before even considering buying a ‘cheap’ island.

I won’t be buying an island anytime soon, how about you?

5 thoughts on “How rich do you need to be before you can buy an island?”