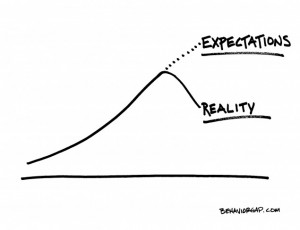 Here’s an article about some guy who’s lost his house: http://www.consumerismcommentary.com/the-financial-planner-who-lost-his-house/

Sad, yes, you say … but, not to be rude, you also say … so have hundreds of thousands of others during this global financial crisis 🙁

But, if you look closely, you’ll see a small difference between this guy and the rest: this guy should have known better.

You see, he’s a financial advisor …

… and, not just any financial advisor, he’s a New York Times financial columnist/blogger!

What’s even more interesting is that he’s prepared to use his own tale of woe (as is Consumerism Commentary in his follow up piece to the original NYT article):

to explain how people continue to behave irrationally about money even when they know better. It’s a good indication of why a healthy approach to your finances requires much more than knowing, “spend less than you earn.” We’d like to think that building wealth is as simple as that, but if that were true, anyone who could do simple arithmetic would be financially secure over time.

Doesn’t anybody see what’s really wrong with this picture?

If the BEST financial advisors can lose their houses … how have the average ones mismanaged their’s … and, how badly can the worst ones screw up your life?

And, would you have known about Carl’s screw-up if he didn’t come forward and tell us?

Who are you seeking financial advice from? And, how can you really be sure … ? 😉

10 thoughts on “Would you take financial advice from this man?”