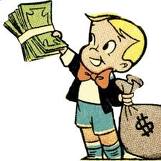 In it, Philip breaks some myths about early retirement, particularly the one where people think that they will do everything in retirement, but end up “waking up at 9:30 am, surfing the Web, sorting out the cable TV bill, watching DVDs, talking about going to the gym, eating Doritos, and maybe accomplishing one of their stated goals.”

Having said that, it’s pretty much my ideal of the early retirement 🙂

But, it was actually this paragraph that caught me, as it’s something that I had experienced but just below the level of conscious thought – maybe it’s something you will one day experience, too:

The magazine Elite Traveler, depicts the lifestyle to which Americans aspire. A watch costs $30,000, a survey of hotel accommodations in Mexico or New Orleans shows suites ranging in price from $3,000 to $20,000, getting from point A to point B costs $5,000 per hour in a private jet, partying for a week involves chartering a yacht for $200,000.  When you say “I’m retired” the other person at the party hears “Even without working anymore, I can afford to live the Elite Traveler lifestyle.”

I have retired with a few million (the title of my blog underestimates my wealth), yet I cannot live the “Elite Traveler lifestyle”, at least not in good fiscal conscience.

I usually travel business class, but sometimes fly coach (I always fly coach domestically); I could afford a Ferrari but drive a BMW (OK, I’m not exactly slumming it: it’s a current model M3 convertible); we travel overseas twice a year (this year we’re ‘saving money’ and only traveling o/s once); and, I live in what can only be described as a mansion (with a ‘spare’ one in Chicago).

But, I certainly don’t consider myself in the Elite Traveler league.

What I did notice – retrospectively, after reading Philip’s essay – is that my friends do make comments indirectly about my wealth (“oh, you don’t have to worry about that” when talking about spending $x on $y), kind of assuming that I’m Oprah.

… kind of: sometimes, I count millions (“oh yeah, the business is worth $1m; the house in Chicago $1m; the house in Australia $5m; the two development lots are worth another couple …” and, so on); I do this when I get nervous about money … when you live in a ridiculously expensive house, with another you can’t get rid of, and don’t really have anything (yet) that brings in an income, even millionaires worry about money. Hopefully, totally unnecessarily … but, they still worry.

I remember the survey conducted a while back by The Spectrem Group who analyze America’s wealthiest families; when asked how much the average millionaire  or multimillionaire thought they would need to feel truly wealthy, they overwhelmingly answered: “about double”.