I am writing you because I have ideas, but, do not know how to turn them into a business.

While at my university, I have been busy developing ideas and protecting these ideas with patents. I currently have 3 patent applications and am currently working on 2 more with a patent attorney. These are all through the university, so they do own 50% of rights to the patent, but at the same time, they are shouldering 100% of the costs. At this point in my life, that seems like a pretty good deal to me. Later when I have more money to invest, I can use any profit generated from these patents to own 100% of the rights to my work.

The problem is that I don’t really know how to move from owning a patent to creating a business to enable the idea and generate profit?

Erik  is talking about transitioning from idea to business. 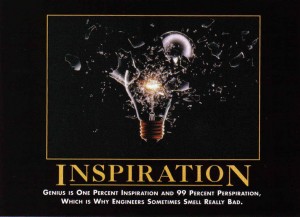 Firstly, I would propose that ideas (and, their patents thereof) belong in the receptacle offered by the device in the carefully selected image, above …

Given that, it seems Erik has quite a few paths available, to take Useless Idea # n to Highly Profitable Business # 1 […  and only. Because lighting rarely strikes twice yadayadayada], but I think I can summarize them into just two:

1. Become an idea/licensing machine: churn them out, begin the patent process, licence off … next idea!

2. Pick the idea that Erik feels has the most commercial promise, fail fast (which means assess the market quickly by trying to get sales and feedback … even before the product is ready), continue with that idea OR shelve and move onto the next.

However, if Erik is contemplating going down the  second path, he should pick the easiest patents, first … preferably something that can be implemented (at least at first) as software … using open-source architectures wherever possible and ‘”off the shelf” programmers (i.e. no PHD’s to develop, unless that’s going to be Erik).

In terms of resources, Erik should follow interesting threads on quora.com … he’ll learn a lot, from experts (unfortunately, he’ll first have to learn how to discern ‘expert’ from ‘wanna be’).

He should also buy a copy of  TechStar Founder, Brad Feld’s excellent book about startups: Do More Faster: TechStars Lessons to Accelerate Your Startup, and Guy Kawasaki’s outstanding book: The Art Of The Start.

Once he has launched and has gained traction (i.e. significant customers and sales; not necessarily profitable sales … yet), Erik can start working on building his back-end ‘business’ … in which case, he should also read Michael Gerber’s business classic – mandatory for established businesses of ANY size: The E-Myth Revisited.

Until then, Erik should focus totally on Product (what do the customers want?) and Sales (will they buy?) …

Oh, and if Erik has the opportunity to take a job, but start this part-time … he should do so!

That way he’ll be able to afford to fail often 😉

11 thoughts on “Reader Question: What to do with my patents?”