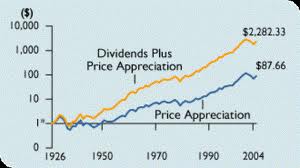 The graph shows the promise of dividend-investing, but Canadian Couch Potato states the reality – the case AGAINST dividends – far more eloquently than me:

Why do shareholders believe so strongly that a $1 dividend is preferable to a $1 capital gain? Meir Statman looked at this question in a 1984 article called “Explaining Investor Preference for Cash Dividends,” coauthored by Hersh Sheffrin. He also reviews the idea in his new book, What Investors Really Want, pointing out that receiving $1,000 in dividends is no different from selling $1,000 worth of stock to create a “homemade dividend.”

Even when this idea is explained to people, most refuse to accept it. Statman suggests that it comes down to a cognitive bias called mental accounting. Investors categorize $1,000 in dividends as income that they will happily spend, but the idea of selling $1,000 worth of stock is “dipping into capital,” which causes them great anxiety. This idea is deeply ingrained in many investors, but it is an illusion, because a company that pays a dividend to shareholders is depleting its own capital.

If you want to understand the arguments – both for and against – investing in so-called ‘dividend stocks’ for the sake of the dividends, you would do well to read Canadian Couch Potato’s whole blog post AND the comments … all for/against arguments are well thought out.

Here is my argument against dividends in a nutshell:

Since you can create a dividend stream yourself (“ignoring taxes and transactions costs, a stock that pays no dividend but increases in price by 6% provides precisely the same return as one whose share price rises 4% and pays a 2% dividend”), it boils down to what could the company do v what can you do with the ‘spare cash’ that the company plans to issue (or not issue) as a dividend:

1. If the company keeps the dividend:

– They could buy more inventory: if their business is a volume business, more inventory = more profits. Consumer products companies such as Kraft and Unilever are great examples.

– They could do more R&D: investing in R&D is necessary gambling on the future; often it will be money wasted (in which case it’s better off in your pocket as a dividend), but sometimes it will provide a huge payback, such as when a pharmaceutical company develops a breakthrough medication, or a venture capital firm finds the next FaceBook.

– They could invest in marketing: more marketing = more sales; pretty simply, huh? Consumer products and technology companies are classic examples; the more often they put their products in front of the consumer, the more sales they seem to get.

– They could invest the cash – Many companies (think Microsoft, Apple, the tobacco companies, and the brewers) are sitting on a ton of cash. Heck, Berkshire Hathaway is sitting on so much of it, even Warren toys from time to time with giving it back to the shareholders (i.e. by issuing a dividend); after all, if they can only get 3% while it’s sitting in the bank and you can get …? Inevitably, though, they use this cash to make a spectacular purchase that transforms the company: think Google’s $6.5 billion offer for Groupon, or Berkshire Hathaway’s $44 billion purchase of BNSF Railway.

2. If you take the dividend:

– You could buy more stock in another company: why invest in another company? Oh, because it provides a better return. So, why not pull ALL of your money from the worse-performing dividend paying stock, and put it all in this company?

– You could buy more stock in a bunch of companies: diversification is often seen as a good thing [AJC: by many reading “how I became rich” blogs; rarely by those writing them]. The more you diversify, the more you tend towards average market returns. Why would you want to take your cash out of a company that produces spectacular returns [AJC: that’s why you invested in the ‘dividend stock’ in the first place, isn’t it?!] in order to put your money into something that produces average returns?

– You could keep your cash in the bank: strangely enough, this one makes sense; if the company can’t do anything better with their ‘spare cash’ than give it to you, wouldn’t you rather have it sitting in your bank account rather than theirs, so that you can at least have the flexibility to make the decision what to do next, eg leave it in the bank, buy some index funds, pay down debt, or even buy back into the company stock when they get out of the ‘sit on a ton of cash with no vision for the future’ doldrums.

… but, if any of these things are better than leaving the money in the company, wouldn’t you be better off taking all of your money out of the company all in one go (i.e. sell the stock) rather than in dribs and drabs (i.e. taking small dividends)?

Let me finish off with a story:

So that he would have more money to invest in growing the company.

Berkshire Hathaway still operates on the same principle: why pull money out of BH when Warren can grow your money faster?!

22 thoughts on “Another case AGAINST dividends …”