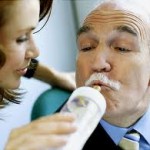 At what age is it appropriate to take financial responsibility for your own life? Before college? During college? After college?

When is it appropriate to grow up, financially?

To help us explore this issue, here is a question that I received by e-mail from RichKidSmartKid:

I’m 29 presently in my first year of college where I used money from my inheritance that I had invested, sold and used to pay for college. I’m soon going to be broke and wont have an income and will be relying on my mother to help me financially though school.

I want to bounce back from this financial hell and increase my networth. Possibly even made some money by the time I complete univeristy. I was wondering what advice do you have?

Sounds like her name is where RKSK wants to be rather than where she is. It looks like she had money, but now it’s gone, and would like some again!

Look, with $6k cash and going to college, the reality is that she is still probably $6.5k better off than most college kids, so here is my advice:

1. Talk to other college kids and see how they do (or intend to) get by – it’s amazing how much you can learn by listening to what other people have to say – then do the opposite 😉

Now, this doesn’t directly apply to RichKidSmartKid who is 29 – but, only in 1st year (good on her for finally thinking about her education, though) – but I have an issue with college kids calling themselves ‘kids’:

In most countries (other than those in the privileged west), by the time you reach college age you would be an adult, long married, with plentiful hungry children and a crop in the field.

In those countries, RichKidSmartKid would have been considered a self-supporting adult a LONG time ago!

Maybe it’s time to start thinking like one now?

4 thoughts on “Are you still relying on your mother?”