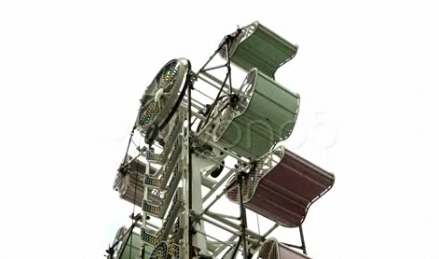 I’m not a great fan of roller-coasters and thrill-rides, although I have ridden my fair share.

The most recent was at Disney World in Orlando, FL where I rode the The Disney World Rock ‘n’ Roller Coaster, mainly because I heard that it accelerated from a standing start as fast a Formula 1 race car, or something along those lines.

But, the one that scared me the most was one that I rode at our local Luna Park in my late teens … it was called The Zipper: more a thrill-ride than a coaster [AJC: I was ‘thrilled’ to find the image/movie above … imagine it at high speed and the whole arm on which the cages are moving around ALSO orbits around a central hub with the effect of ‘throwing’ each cage towards the concrete ground!], as it consisted of a number of cages spinning on an orbital arm; the effect – at certain stages of the ride – was rushing face down towards the pavement … a nice way to pick up your heart and shove it firmly into your mouth!

This effect is also one of the main reasons that I’m not enamored with most of the so-called Safe Withdrawal Rate retirement strategies that abound.

Whereas the main differentiator of these plans is usually in the % that you can ‘safely’ withdraw each year from your retirement ‘nest egg’ (usually in the 3.5% – 5% range), they are usually based on some sort of mathematical calculation that takes into account:

2. The Number of years you expect to live (usually 30 or 40 years post-retirement)

3. The amount that you retired with

4. The mix of cash, stocks, and bonds that you would be most comfortable with

5. The probability that you would be most comfortable with that your money will last as long as you do (usually 75%+)

The mathematical models used then try and take these various factors into account, along with the historical performance of the cash/bond/stock markets and calculate what % of your nest-egg that you can withdraw that will – within the % accuracy that you chose – ensure that you have at least $1 left to your name on the day that you predicted that you will die.

Now, if that doesn’t sound totally idiotic to you, let’s just imagine for a moment that you CAN predict that you will die pretty close to the date that you selected for the model to work AND that you are comfortable with something less than 100% certainty that your money will last as long a you do …

… I still can’t help thinking that for the latter years – when you are pretty old and absolutely powerless to do anything other than ‘hang on for the ride’ – you will have to endure the REALITY of your bank account rapidly depleting towards that ‘perfect’ $1 remainder (or, whatever remainder you selected).

And, I can’t help but picture myself – eyes ever widening in financial terror – wondering: “will I hit Ground Zero ($)?”

PS I’m glad that I didn’t read about the safety issues with the earlier version of the Zipper ride – likely the same model as the one that I rode – otherwise my ‘face rushing to meet the pavement” may have turned out to be real (!):

On September 7, 1977, the Consumer Product Safety Commission issued a public warning, urging carnival-goers not to ride the Zipper after four deaths occurred due to compartment doors opening mid-ride … the same scenario was repeated in July 2006 in Hinckley, Minnesota when two teenage girls were ejected from their compartment as the door swung open.

10 thoughts on “Staring down as the ground rushes up to meet you!”