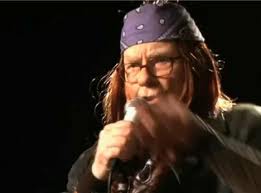 I don’t think that I ever mentioned it at the time, but I went to Warren Buffett’s Annual General Meeting in Omaha in 2008.

It was like going to a rock concert … without the music.

It was held at some football stadium, which was packed with 30,000 (maybe more?!) people and Warren Buffett and his long-time business partner, Charlie Munger sitting at a table with three large video screens behind them (just showing Warren and Charlie sitting at the table … only MUCH larger!).

They basically spent the day munching on Sees Candy (peanut brittle, I believe) and sipping on Coke …

Warren invites all the ‘international visitors’ [AJC: That’s anybody who registers with a foreign passport as their ID … I have a US driver’s license, of course, but I heard that there were ‘extra benefits” to registering using international ID] to a meet and greet.

This meant bringing anything that you bought from his trade show in the huge conference hall attached to the stadium (he has stands from a number of the 70+ businesses that he owns) and he and Charlie will shake your hand and sign it one item that you bought.

But, he stopped doing that – after 2008 – because there was a line of 1,000+ people waiting to shake his hand and get their signature. I know this, because when I got to him, the World’s Greatest Investor spoke to me!

He said (looking visibly paled): “Are there many more people in this line”. Sadly, I had to say there were … 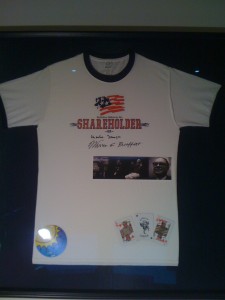 Still, I got my $5 T-shirt signed, and had it framed with a couple of Warren Buffett and Charlie Munger playing cards (!), a couple of pictures that I printed from a web-site after googling “warren buffett”, and my round official entry badge.

Which has nothing to do with anything other than Bill McNabb – who replaced the famous founder of Vanguard (with their famous, low-cost Index Funds), John Bogle, who also seems to afford ‘rock star status’ with fans of his investing philosophy (which, naturally centers around buying and holding Index Funds) calling themselves Bogleheads and acting more like rockstar groupies than investing disciples – recently said that one “essential ingredient” in the investing and advice business, is:

Simplicity, which is exemplified by the “Five-Minute Rule” first coined by Richard Ennis of the pension consulting firm Ennis, Knupp: “If you don’t understand the thesis underlying an investment in five minutes or less, take a pass.”

This equally reminds me of a recent story of a company that a friend of mine was CEO of that existed solely to build, manage, and sell tax-advantaged agricultural ‘investments’:

Basically, this company did complex deals with rural land-owners, farmers, and so on to plant certain crops and sell shares to private investors; the advantage to the investors being (a) immediate and attractive tax-deductions, and (b) future (i.e. 10 to 30 year) capital returns … trees take a LONG time to grow!

Given that one friend was their CEO, another one of their key operations directors, and a third an enthusiastic ‘professional’ (counting, amongst others, my wife as his client) who positively represented the project to a number of my affluent friends who were also his clients, you may ask how much I invested in the company.

The answer is ZERO.

You see, I don’t invest in anything:

1. That eats or grows (because eventually it will stop eating, stop growing, and will die),

2. Uses tax-advantages as one of its key features (because I don’t mind paying my fair share of tax and governments have a sneaky habit of changing the tax rules),

Postscript: because of the Australian drought, many of the trees did die, and the government did change the tax rules, and the company did go broke … and, many of my friends did lose 100% of their investment.