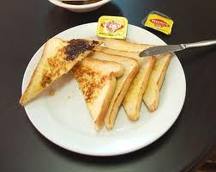 It occurs to me that, at the age of 49+, that I still like Vegemite, that quintessential Australian curiosity very loosely labeled as ‘food’.

If you don’t know what Vegemite is, let me give you a few brief ‘highlights’:

– Vegemite is a salty black spread that is best used VERY sparingly on toast or dry crackers;

– Aussie children are almost weaned on it … it’s the only way to learn how to like it!

– Vegemite, on the other hand, is made from the sludge left over from pouring beer out of its vats (really!)

– It used to be fed to pigs, because of its very high Vitamin B content, until an Australian Food Scientist discovered how to refine it slightly and feed it to children [kids = pigs?]

Even though I actually LIKE Vegemite, I can understand that to most people it is totally inedible:

I met a food scientist who was working on a project to create Vegemite cookies to help feed the less-fortunate in Africa (again, because of its super-high Vitamin B content); this came on the back of the very successful Milk Cookie project which helped to bring Calcium to places (like Africa) where the shipping and transport of dairy products would be just too difficult.

Unfortunately, they had to cancel the project … there was just no way to make the Vegemite cookies taste good!

Now, I can actually relate to how bad this stuff must taste to others (yet tastes so good to me … in moderation!) because I was traveling to Amsterdam and in the clothing store (that I stopped by to buy a hat and scarf for the bitterly cold winter weather) there was a jar of candy on the counter …

… actually, it was liquorish – so, I took one and almost spat it straight out … it was THAT horribly salty! Apparently, it’s a delicacy in Holland on par with Vegemite (and, as bad tasting to the uninitiated).

One man’s food it definitely another man’s poison.

But, to get an idea as to how popular Vegemite really is – despite the taste (!) – here are three anecdotes for you:

1. Kraft bought the rights to Vegemite at some point, and if you visit their offices in Northbrook, Illinois (as I have) you will see its logo displayed very prominently on the wall above the receptionist’s desk. Not bad for a product only sold in a country of 20 million people (and, stocked in the USA almost purely for visiting Aussies).

2. Vegemite is inherently kosher (apparently pig food isn’t as unkosher as pigs-as-food) , but when Kraft decided to cut costs and take it off the kosher list (meaning that religious Jews in Australia could no longer buy it … a very small minority, in a very sparsely populated country), there was such an outcry that Kraft had to certify Vegemite as kosher again.

3. When we came to America, we brought 6 huge jars with us (and, brought more back on every trip home); this is not just us: my wife accidentally met a girl who was also relocating to Chicago … they were both at the supermarket checkout with a few of these large jars and (naturally) got talking.

Well, there is a personal finance message and it’s this: one size doesn’t necessarily fit all … what one person likes may not suit the other at all.

That’s why when Steve asked me why I recommend that you put aside 2 year’s living expenses in retirement (as opposed to zero dollars before retirement) in your ’emergency fund’, I can’t really disagree when he says:

Adrian, what you said makes sense in most cases I suppose, but ,each case /person will have different circumstances ,even after retirement.Some sort of funds set aside seems a wise move.You cannot fore see very situation that might arise,especially at an advanced age.

BUT, the principles behind these rules – indeed, the whole methodology that I am slowly unfolding in these posts (in the random, shambly way that bloggers like to follow) – is One Size Fits All.

Because the principle is simple: Find out how much you need to make (and why and by when), then work out how hard you need to work (financially) and how much risk you need to take to get there, then go for it!

But, if you stray too far from the the guidelines that I provide, the chances are that you will not be investing enough to make any sort of meaningfully large Number by any reasonably soon Date.