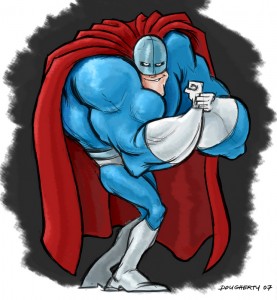 The story so far:

Hypothetical Mike (the hero of our story) has super income-earning powers (ranging between $250k and $350k p.a.) … his powers also extend to corporate high flying, not to mention having a super-strong handshake 😛

His mission: to amass $10 million within 14 years.

But, like every superhero, he has a weakness: he keeps too much of his current $1.7 million networth in cash … $1.3 million of it to be precise.

Cash is kryptonite to financial superheroes like Hypothetical Mike!

Does HypeMike – as he is known in superhero and rapper circles – need to fly higher and higher in order to fulfil his mission? Or, can he simply destroy that stash of kryptonite and let the natural laws of investing wisely take over?

In an unusual twist, we let the readers decide the outcome of this story …

For example, here is what Steve said:

What are Hypothetical Mike’s Talents and hobbies? Based on what he likes to do in his spare time. I might recommend starting a business, that could bring in an income and later be sold for a nice return. This could help him reach that goal quite well. It would be less like running a business cause it would be something he enjoys anyway.

If HypeMike were a mere mortal, I would agree with Steve: you and I should ramp up our Making Money 201 activities in an attempt to accelerate our income …

… but, HypeMike already has his MM201 ‘money tree’ (i.e. his relatively high-paying job); coupled with his $1.7 million starting bank and his 14 year timeframe, he need leap no tall buildings to reach his Number.

Hypothetical Mike shouldn’t do ANYTHING to jeopardize his job, hence his income stream (e.g. moonlighting might be against company rules, or might distract him, tire him out, etc., etc.).

On the other hand, a number of readers commented that HypeMike’s money – merely sitting in cash – is his real problem. For example, Brad said:

If you are successful at running this business (you said you turned it profitable) then you should be in a position to negotiate larger and larger bonuses or equity ownership. Seems like THAT is what you are talented in. Don’t feel like you need to start investing in real estate or small biz because that is how OTHER people might have gotten rich.

I do agree that you should keep some cash positions if that makes you feel secure, but also to keep the bulk of your invest-able assets in at least an S&P500 index fund.

In my [AJC: emminently unqualified] opinion, Brad is 100% correct.

Hypothetical Mike should take a close look at Brad’s advice and follow it!

[Disclaimer: Brad is likely just as unqualified as I am to offer personal financial advice … always seek professional advice!].

7 thoughts on “Hypothetical Mike … and, Beyond!”