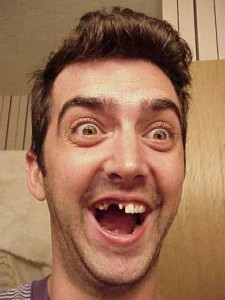 [Disclaimer: Artist’s rendering of AJC … any resemblance to other bloggers living or dead is purely coincidental]

Have you noticed that I don’t have a category for debt on this blog?

[AJC: you can click on any of the keyword/categories in the orange header-banner above to see a list of blog posts focusing on that subject]

It’s not because we don’t talk about debt, as we clearly do …

…. it’s because, to me, creating or paying off debt is just the same as investing (after adjusting for tax: a dollar saved in interest, is the same as a dollar earned in interest or investment income, right?).

That’s why I was genuinely interested in finding out what was going through fellow-blogger Clever Dude’s mind when he loudly proclaimed:

As of today, we have paid off all $113,000 of our student loans, auto loans and credit card debt.

My fellow blogger is right to be proud of his achievement … but, does that make it the right investment choice?

He paid off $113k … now, this is no small achievement, some people don’t even save that in their entire lifetime! Still I couldn’t resist asking Clever Dude for some details:

I chose to pay off the student loan because it was more manageable and I could get it off the books faster than the 2nd mortgage. Mathematically, the 2nd mortgage makes more sense until you factor in the tax deduction which brings them down to about equal.

I also wanted to know a little about his current net worth (after the mammoth debt-payoff feat) – nosey, aren’t I?! Anyhow, Clever Dude was happy to share:

Don’t mind the math as I rounded:

So, Clever Dude has ‘invested’:

-> 29% in (presumably) depreciating ‘assets’ such as autos and personal property

Now that he is debt-free, what  will drive Clever Dude’s investment strategy from here on in? He says:

Investing and savings are next up in our planning. Honestly, we’ve spent so much time just thinking about debt, we haven’t spent much time on the future. Now is the time.

Now, I’m not here to pick holes in Clever Dude’s investment strategy as he had a strategy and moved mountains to achieve it – not to mention, that we know so little about Cleve Dude’s true financial situation that we are in no position to advise / criticize …

…. but, I do want to use this example to show why following a blind – and, in my mind totally arbitrary – investment goal such as “reducing debt” is not always the best idea:

Clever Dude has only 37% of his net worth in investments right now (OK, he is working on his Master’s Degree, so he has had other things on his mind) and has limited the bulk of his net worth’s returns to only 2% to 6% (or so) by almost-totally focusing on paying debt.

So, that he can start “investing and saving”!

Now, does that make sense to you?

8 thoughts on “Is he really a clever dude?”