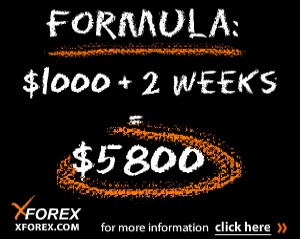 Aside from the obvious [AJC: Believing that you can turn $1k into nearly $6k in just 2 weeks is obviously stupid, right?] …

… there’s a basic reason why you are doomed to failure with FOREX (i.e. foreign exchange) trading activities. First, though, let me explain what FOREX is for those who don’t yet know:

My dire ‘doomed to failure’ prediction comes about because of that last sentence: FOREX “has been referred to as the market closest to the ideal [i.e.] perfect competition”.

Think about it: for every dollar, drachma, or rupee that you buy … somebody has to be on the other side selling. And, since you are ‘betting’ on the relative strength of one currency versus another, you are effectively betting opposing arguments.

You have the same points spread on the ball game, but you are betting on opposing teams … one winner, one loser.

Now, who do you suppose has better information? You, or the other guy?

Who do you suppose has better FOREX training and more experience? You or the other guy?

You are the amateur, the other guy is (probably) the professional who does this for a living …

Now, you can argue that people are trading currency because they are moving country, so the ‘relative strength’ argument doesn’t apply … or, that they are government agencies moving in and out of foreign positions for stability and political reasons … or, that they are corporates moving funds between various international subsidiaries …

Which all be true and yet another reason why you are gambling and they are expertly managing their portfolios.

The same double-sided coin argument applies to options trading … indeed, most other forms of trading: you bet one way and the person on the other end of the transaction has bet the other way. And, they probably know what they are doing …

… best case is that they are equally naive as you 😉

One winner, one loser.

So, that means that 50% of the traders out there must be winning and the other 50% losing?

Well, the stats – somewhat surprisingly – tell a different story; cast your mind back a few weeks, where taloudellinenriippumattomuus  mentioned a Taiwanese study that found that (after costs) only 0.16% (or 1.6 per thousand) of traders [AJC: in this specific case, Day Traders, but I doubt whether FOREX or stock option traders fare much better] actually made a profit!

I’m sure that plenty of our readers have made – and lost – relative fortunes trading; if so, I’d love to read your comments …