It really doesn’t take much to excite me, as evidenced by this commercial that I just came across …

… given my obvious passion on the subject of Numbers (as opposed to mere ‘numbers’) you won’t be surprised to hear that I jumped straight onto ING’s web-site to see what their take on this whole ‘Number-thing’ was:

You be the judge:

…. now, I might just be a touch pedantic, but isn’t the $7 million dollar question: “how much income do you need in retirement?”.

In other words, isn’t the whole point of such a tool to help you come up with this number, rather than asking you to pluck it out of ‘thin air’ [AJC: like I just did with the $250k figure that I randomly plugged in]?!

And, without it, isn’t this just some sort of glorified calculator? 🙂

BTW: According to ING, my Number is: 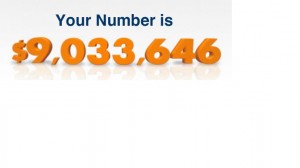 2 thoughts on “How to excite a millionaire …”