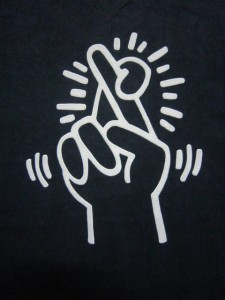 It’s clear to me that the most successful – and, wealthy – people of all ages are indeed lucky … certain things had to go ‘just so’ in order for that big breakthrough to be made.

BUT, I think the luck factor is a rear view mirror effect …

… that is, if you position yourself for success, the luck will come but you won’t know exactly when or how.

Richard Wiseman a researcher in the field of luck (he wrote a series of books on the subject) says that lucky people generate good fortune via four basic principles:

1. They are skilled at creating and noticing chance opportunities

2. They make lucky decisions by listening to their intuition

4. They adopt a resilient attitude that transforms bad luck into good

I’m not sure that this is the same as visualization techniques (a la The Secret), I just think it’s a difference in attitude.

In this context, Richard gives some advice on how to turn your luck for the better:

Unlucky people often fail to follow their intuition when making a choice, whereas lucky people tend to respect hunches. Lucky people are interested in how they both think and feel about the various options, rather than simply looking at the rational side of the situation. I think this helps them because gut feelings act as an alarm bell – a reason to consider a decision carefully.

Unlucky people tend to be creatures of routine. They tend to take the same route to and from work and talk to the same types of people at parties. In contrast, many lucky people try to introduce variety into their lives. For example, one person described how he thought of a colour before arriving at a party and then introduced himself to people wearing that colour. This kind of behaviour boosts the likelihood of chance opportunities by introducing variety.

Lucky people tend to see the positive side of their ill fortune. They imagine how things could have been worse. In one interview, a lucky volunteer arrived with his leg in a plaster cast and described how he had fallen down a flight of stairs. I asked him whether he still felt lucky and he cheerfully explained that he felt luckier than before. As he pointed out, he could have broken his neck.

Hopefully, reading this blog is one giant step along the path to making you a lucky person, too 🙂

4 thoughts on “How lucky are you?”