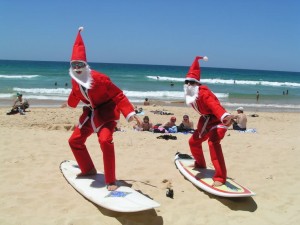 Being able to call two countries ‘home’ is a luxury that few can afford, and it opens up some interesting points – and counterpoints – of view.

For example, I came back to Australia with a new appreciation for the infrastructure that such a sparsely populated country has. To put it into perspective, my two homes of Australia and Illinois share around the same population (circa 20 million), yet Australia:

– has the land mass of the entire contiguous states of the USA (i.e. the 48 U.S. states located on the North American continent south of the U.S. border with Canada),

– has 4 or 5 major national banks (IL has no equivalently sized banks of its own),

– 2 national (and international) airlines (IL has none that I am aware of),

– A national system of roads, a number of ports, 3 layers of government, etc., etc.

Other points of difference are more subtle, yet even more interesting (at least, to me); one of my favorite being that Xmas and New Year in Australia is summertime!

This means that Australia partially shuts down from about the last week in December until the end of the first week or two in January; for example, attorneys and accountants will shut their offices entirely for 2 to 4 weeks and most factories will shut off production entirely for at least 2 weeks.

What do Aussies do in that time?

For example, I am writing this post from my rented vacation apartment in a very warm part of Australia while my daughter finishes her first ever surfing lesson …

Aussies have no trouble vacationing, in fact every Aussie worker from the humblest production line worker to the highest paid corporate executive receives a minimum of 4 weeks paid vacation each year (plus 5 to 8 days paid ‘sick leave’, and 9 or so paid public holdays, all for a normal 36 to 40 hour work week).

Oh, and until recently, employers had to pay an additional 17% bonus on their employees’ normal salary while they were on vacation!

I remember laughing when I first arrived in the USA, where vacations are usually accrued at only 2 weeks per year, at seeing advertisements urging Americans to take their vacations … it seems that we have the opposite problem in Australia, we have to encourage our employees back to work!

Tomorrow, I’ll try and bring this preamble back to some sort of personal finance angle 🙂

9 thoughts on “Xmas in Australia …”