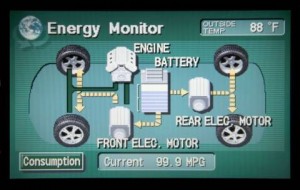 This is actually a post about finance, so keep reading, even when it seems to be all about cars!

My wife counterbalances: she owns a 2009 Lexus 400 Hybrid. She grudgingly refills about once per month … sometimes I think that she must push the car up hills just to avoid having to refill early.

But, she also thinks playing Gas Roulette is a heck of a lot of fun.

My first car (actually second) in the US was a Mustang GT convertible. It had a monster V8 engine, sounded great with the roof down. Needed a gas station on every corner. Drove like a tank.

It was also a heck of a lot of fun.

But, it was the dumbest car I ever owned …

There was an air-scoop on the hood of the car. The idea of an air-scoop is to suck in extra air to the carburetors on the car to keep the engine happy.

An air-scoop is supposed to be a performance enhancement …

… except, it sticks up out of the hood, so it destroys some of the air-flow, increasing drag, actually decreasing performance and fuel economy.

But, the engineers are made to make the hard design choices: do the increases in performance (extra efficiencies in the carbies) offset the losses (extra drag)?

Naturally, the engineers are experts at what they do so we can trust them to make the right decision. Right?

Well, I would have thought so … until I bought my Mustang. You see, I’m a layman, but even I can tell that:

1. The Mustang has NO carburetors (neither does any modern car), nor does it have any turbo-chargers or anything else that required the injection of air that a hood air-scoop would provide.

2. Now, here’s the killer (just in case we have any engineers out there to dispute my point 1.): the scoop has no air-holes in it.

As a marketing device, simply designed to make me buy the car, it worked brilliantly!

In other words, it reduces the performance of the vehicle!

Now, don’t get me wrong, the Mustang performed well, and was fun to drive, but didn’t perform better than ‘advertised’. It’s (partially) a marketing con.

My wife’s hybrid is also (partially) a con.

She paid a lot of money to have a hybrid that clearly does save money. But, just like the Mustang, it is designed to perform less than optimally, I believe just to build a marketing story to help sell the product.

The Lexus Hybrid includes a dynamic dash that shows the power flow between the gas engine, the wheels, and the electric motors.

If you don’t understand how a hybrid works check out this video:

In essence, it’s a closed system that uses electric motors (and batteries) to augment the traditional 6 cylinder gasoline engine:

– It saves gas simply by ‘switching off’ the engine whenever the vehicle stops.

– The electric motor’s batteries never need recharging: they are simply charged by an alternator and whenever the car is coasting or braking (it’s called ‘regenerative braking’)

Now, just like the Mustang’s air-scoop, the problem is in the ‘performance enhancement’ of the recharging system. For example, let’s take a closer look at regenerative braking:

Whenever the car is coasting down a hill, it needs to be able to retain as much momentum as possible to help carry it up the next hill, otherwise you have to hit the gas pedal that tiny bit earlier.

The regenerative braking takes a bit of the car’s energy and turns it into electricity, creating additional friction which slows down the car. So you do have to hit the gas pedal that tinier bit earlier.

So, the hybrid works (because when you have to come to a complete stop, such as at a traffic light then you might as well put some energy into the batteries rather than simply heating up the brake pads), but it would work BETTER by turning OFF its regenerative braking ‘performance feature’ when coasting.

But, then that pretty display (image at top of post) wouldn’t be nearly so pretty 😉

What does this have to do with finance?

Well, your 401k is pretty much like my wife’s hybrid!

But, it could be a lot BETTER simply by turning OFF some of the ‘performance enhancements’ that they’ve added to make the products SEEM more attractive to both employers and employees e.g.:

1. Choices of funds: it has been shown time and time again that long-term buy/hold investors would be better off either selecting their own stocks (if they have the necessary desire and aptitude) or simply putting their money into an ultra-low-cost Index Fund (e.g. S&P500).

All those other high-fee fund choices perform more poorly over the long run. So, why not eliminate them from the fund choices offered? Simple: marketing!

2. Additional services: Fund managers, and the guys that put together benefits plans for employers, offer all sorts of freebies & incentives to the employer to encourage them to buy THEIR funds and services; the problem is, these help the employer – not you. Worst of all, they cost you money. So, why not eliminate them? Simple: marketing!

So, a 401k performs a lot worse than it should, just so the marketing guys can pitch a better story.

Forget the Lexus Hybrid – and, your 401k – they don’t deliver on their promise.

Instead, hop into a BMW M3 – or, direct stocks, real-estate, or business investments – and, supercharge your life.

Unlike my wife’s Lexus Hybrid, or your 401k, their promise – living a little on the edge, but being thrilled with the results – is delivered in spades!

Marketing and performance, for once, are totally aligned 🙂